Soulpepper at Play features a Cabaret of Culinary and Artistic talent
Wednesday October 27, 2010 at 6:00pm at the Young Centre for the Performing Arts

27, 2010 at the Young Centre for the Performing Arts. Soulpepper at Play provides a special sneak peak inside Soulpepper  - complete with a Gala Dinner, Silent and Live Auctions and original Soulpepper performances.

Hosted by Albert Schultz and chaired by Soulpepper Board Member Donna Slaight, Soulpepper at Play is an evening of culinary and theatrical delights beginning with a cocktail reception followed by a Gala Dinner, catered by Canadian Celebrity Chef Mark McEwan’s (Food Network’s The Heat) award-winning culinary team North 44. After the Gala dinner, guests will be entertained with an array of intimate Cabaret performances by Soulpepper artists and a spontaneous, on-the-spot piece created by the Soulpepper Academy. Featured artists include: Soulpepper Founding Members Stuart Hughes, Michael Hanrahan, Diego Matamoros, Nancy Palk, William Webster, and Joseph Ziegler along with Derek Boyes, Kevin Bundy, Oliver Dennis, Abena Malika and Mike Ross to name a few. 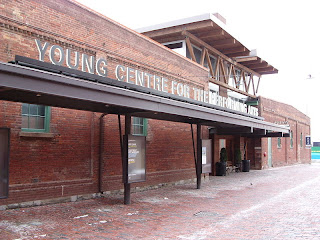 Soulpepper at Play takes place Wednesday October 27, 2010 at 6:00pm at the Young Centre for the Performing Arts, located at 55 Mill Street, Building 49, in the Distillery Historic District. Individual tickets are $1,000 or $8,000 for a table of 8. Tickets are available by contacting Shannon Boeckner, Development Events Coordinator at 416.203.6264 x. 140 or by emailing shannon@soulpepper.ca