is a visually brilliant dance and live music creation that connects the world Indigenous cultures of Canada, Mongolia and China.

It makes a triumphant return to Toronto for one-night-only on Saturday November 13 at 8pm at the Betty Oliphant Theatre, after which it will tour to Montreal's Place des Arts (November 20-21), Yukon Arts Centre (November 24-25), and the Banff Centre in Alberta (November 27-28). 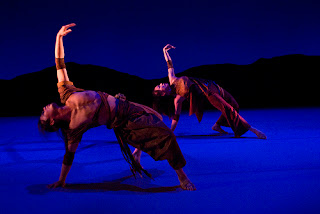 Tono is heavily grounded in the theme of horse culture, spanning plains traditions in Asia and North America, and celebrates the creature universally regarded as the epitome of strength, grace and beauty. Conceived and directed by Sandra Laronde, and choreographed by Sandra Laronde and Roger Sinha, Tono is a stampede for the senses. (Photo by Don Lee)

This three-country project unites and collaborates with artists from three diverse countries that share the common themes of horse cultures in Asia and North America. Tono unites East with West; tradition with contemporary innovation; dance with live music with contortion; and Indigenous to the world.

"Tono is a ravishingly beautiful dance work. The dancers recreate a stampede that builds with excitement... absolutely stunning stretches and body twists. A wonderful achievement."  - Globe and Mail 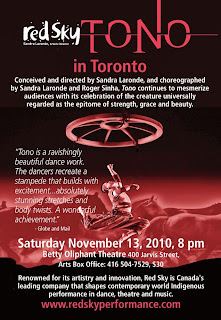