on November 09, 2010
Toronto Dance Theatre is proud to present the remount of
Severe Clear
Christopher House's Dora-nominated production from 2000 Severe Clear was inspired by House's once-in-a-lifetime wilderness journey with 11 other performing artists in Canada's Yukon as part of the Yukon Journey Project, a millennium initiative of the Yukon Arts Centre which commissioned the piece. It is a cool, urban response to the wild, spectacular beauty of the North, drawn directly from his experiences there. Whimsical, spontaneous and deeply spiritual, Severe Clear evokes the feelings, stories and astounding physicality of the mythical North as it follows a group of nomads through the northern landscape. Dancers morph into animals and back into humans, with movement ranging from risky partnering to inventive solos and ensemble work.

Water and ice are present throughout, both in the score and onstage. Dora-winning composer Phil Strong's brilliant soundtrack uses nature sounds recorded during the journey, such as the calving of glaciers, blended with infectious techno, a cappella harmonies from the TDT dancers and an incisive spoken text by House. James Robertson's inventive scenic environment recalling water and ice perfectly entwines with Roelof Peter Snippe's striking lighting design that evokes the Northern Lights and deep shadows of the tundra. 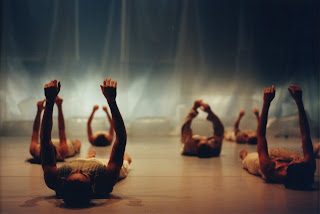 Born and raised in St. John's, Newfoundland, Christopher House joined TDT as a dancer in 1979, was named Resident Choreographer in 1981 and became Artistic Director in 1994. House is one of Canada's most enduringly inventive choreographers, an artist with a voracious appetite for new ideas and in the full maturity of his powers whose intelligent productions speak directly to the big questions of our lives.

Christopher House has transformed TDT into a company known internationally for its fresh, intelligent and provocative dance. He has contributed over sixty works to the TDT repertoire including Glass Houses, Four Towers, Early Departures, Vena Cava and Chiasmata. He has created works for Lisbon's Ballet Gulbenkian, the National Ballet of Canada, Les Grands Ballets Canadiens and Ballet British Columbia, among others, and directed two collaborations with Joel Gibb and The Hidden Cameras.

House has received many awards for his work, including three Dora Mavor Moore Awards for Outstanding New Choreography. He received the Muriel Sherrin Award for International Achievement in Dance in October 2009, and was made an honorary Doctor of Letters by Memorial University in 2010. He is also an Associate Dance Artist of Canada's National Arts Centre.