The remarkable Stella Rambisai Chiweshe, known worldwide as the ‘Queen of Mbira’ is an acclaimed virtuoso of the mbira, a sacred instrument central to Zimbabwean Shona culture. The original mbira consists

of 22 metal keys but nowadays mbira players have added a few more to 28 keys fixed on a small wooden board made from a special healing tree.

Originally, for resonance the instrument was wedged with a stick from a special mind cleansing tree. The keys are played with the right forefinger and the two thumbs. Chiweshe is one of the few musicians in Zimbabwe and Southern Africa who have worked for over 35 years in the role of mbira musician, dancer, instructor, and traditional spiritual advisor.

Born in Mujumhi, a village in Mhondoro Zimbabwe, the woman now known by her people as ‘Ambuya Chinyakare’ (Grandmother of Traditional Music) began drumming at the age of eight and attended her first mbira ceremony at 16 years old. When Zimbabwe was still a British colony (Rhodesia), Chiweshe played at forbidden ceremonies before returning to her job as a young maid. The colonial government banned the instrument fearing its magical powers, and playing mbira was punishable with prison. At the time, local missionaries called mbira music “Satan’s work”. Even her own people told her that it was taboo, an instrument that a woman could never play. Yet by the mid-sixties, she had become recognized as a gifted maridzambira (mbira player), playing at healing ceremonies, funerals, concerts and important parties and her debut single, ‘Kasahwa’, had gone gold.

Her solo work has established her as one of the most original artists in the contemporary African scene using popular music to show the depth and power of her traditional spiritual music at home and abroad. Chiweshe has accumulated an extensive discography of 22 singles and 7 international albums. Regular European and North American touring, plus notable appearances at Womad festivals have helped to keep her long career as a performer, educator and healer alive and vibrant. 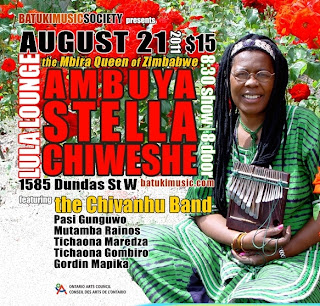 Stella Chiweshe will be backed by her Toronto-based Chivanhu Band consisting of; Mutamba Rainos on mbira, Pasipamire Gunguwo on marimba, Tichaona Maredza on marimba and guitar, Tichaona Gombiro on bass guitar, and Gordin Mapika on drums.