Ahuri Theatre, in association with Why Not Theatre, presents the world premiere of
A FOOL'S LIFE
Inspired by the life and short stories of Akutagawa Ryunosuke

Toronto, September 8, 2011 - Ahuri Theatre, in association with Why Not Theatre, announces the world premiere of A Fool's Life, a fantastical tale of a family man coming undone, conceived and directed by Ahuri 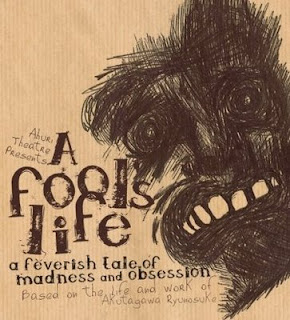 Theatre Artistic Director Dan Watson. Inspired by the life and work of celebrated Japanese writer Akutagawa Ryunosuke, regarded as the "father of the Japanese short story," A Fool's Life opens September 30 and runs to October 8 at The Theatre Centre, with a preview on September 29.

Akutagawa Ryunosuke (1892-1927) is one of the most celebrated writers in Japan and is best known as the author of the short stories adapted into Akira Kurosawa's Oscar-winning film Rashomon. The author of over 150 short stories, Akutagawa struggled with declining mental health before committing suicide at the age of 35.

Using and adapting Akutagawa's own words, A Fool's Life tells a story eerily reminiscent of this great writer's turbulent life, his battles with mental illness and what led to his eventual suicide.  Through a series of

flashbacks and reminiscences, the character of Akutagawa shares the events that shaped him, and brings to life three of his short stories: The Nose, Horse Legs and Hell Screen. Dark, bizarre and absurd, this multilingual piece (primarily in English with Japanese) combines elements of movement, live drumming, shadow puppetry and projections on a set made of paper.

Ahuri Theatre also presents a special event celebrating Japanese performing arts at The Theatre Centre the afternoon of October 1 as part of Culture Days. The event includes workshops in Kagura Drumming and Nihon Buyo dance, as well as Japanese storytelling performances and readings. After that evening's performance of A Fool's Life, The Theatre Centre hosts free screenings of classic Japanese animé and monster movies with live musical accompaniment from 10pm - 3am to coincide with Nuit Blanche.

Ahuri Theatre was formed in June 2005 from the work of its founding members at l'École Internationale de Théâtre Jacques Lecoq in Paris. The company's principal activities have been in both Japan and Canada. Its performances include Peer Gynt (in partnership with the Norwegian Embassy of Tokyo) and Yabu No Naka, which played to sold-out houses at both the Montreal and Toronto Fringe Festivals, and most recently played at the world renowned Setagaya Theatre in Tokyo. A Fool's Life was developed in Toronto and Japan through the support of the Japan Foundation as well as the Toronto, Ontario and Canadian Arts Councils. 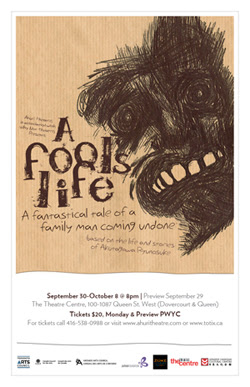