Witness the story as it should be told! 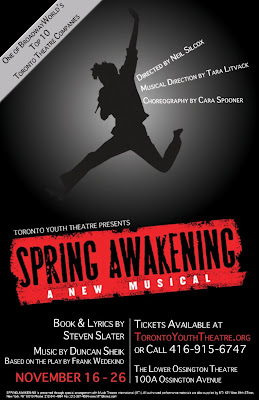 TORONTO - The landmark musical SPRING AWAKENING is an electrifying fusion of morality, sexuality and rock & roll that is exhilarating audiences like no other musical in years.

Join this group of late 19th century German students on their passage as they navigate teenage self-discovery and coming of age anxiety in a powerful celebration of youth and rebellion in the daring, remarkable SPRING AWAKENING.

Spring Awakening is a rock musical adaptation of the controversial 1891 German play of the same title by Frank Wedekind. It features music by Duncan Sheik and a book and lyrics by Steven Sater. Set in late-19th century Germany, it concerns teenagers who are discovering the inner and outer tumult of sexuality. The original play was banned in Germany for a while due to its portrayal of abortion, homosexuality, rape, child abuse and suicide. In the musical, alternative rock is employed as part of the folk-infused rock score. Spring Awakening received eleven 2007 Tony Award nominations, winning eight, including Tonys for best musical, direction, book, score and featured actor. The show also won four Drama Desk Awards, while its London production won four Olivier Awards.