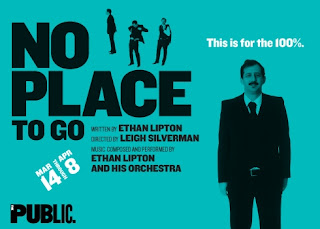 Pub, beginning Wednesday, March 14. Directed by Leigh Silverman and written by Ethan Lipton with music composed by Ethan Lipton and His Orchestra, NO PLACE TO GO is the first Joe’s Pub commission, as part of its New York Voices Series, to become part of The Public Theater’s season.

Commissioned last spring by Joe’s Pub as part of its first ever grant from the National Endowment for the Arts, NO PLACE TO GO was developed to have an extended three week engagement at Joe’s Pub through Sunday, April 8. It will have an official press opening on Wednesday, March 21.

The company where he’s worked for the past 10 years is moving to another planet, and playwright Ethan Lipton doesn’t want to go.  Part love letter to his co-workers, part query to the universe, part protest to his company and country, NO PLACE TO GO delivers a hilarious, irreverent and personal musical ode to the unemployed in this unforgettable evening.

“Ethan is our modern Everyman, a fantastic amalgam of Woody Guthrie and Woody Allen,” said Artistic Director Oskar Eustis.  “No Place To Go is incredibly insightful, timely, and delightful.  We are thrilled to be able to bring back this fantastic show to share with a broader public.  Ethan deserves it, and so does our audience!” 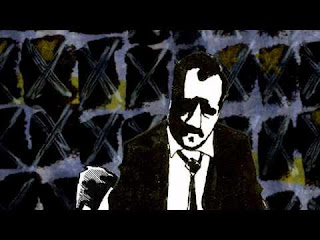 “Ethan Lipton is an incredible artist who has delighted audiences at Joe’s Pub throughout the years, and I am thrilled that we are now able to bring his extraordinary talent to a larger audience,” said Joe’s Pub Director Shanta Thake. “This beautiful piece that was part of Joe’s Pub’s first ever series of commissions is a true testament to Ethan’s unique point of view that also manages to be completely universal in its appeal.”

Ethan Lipton (Playwright). His plays have been seen and heard in New York, Los Angeles, Seattle, Edinburgh (Scotland) and Berne (Austria). Ethan is a winner of a NYFA grant and a Drama-Logue Award for playwriting. He has been a Kesselring prize nominee, an O’Neill Conference finalist; a member of the inaugural class of the Emerging Writers Group at The Public Theater; and is currently a Playwright’s Realm Fellow.

Lortel nomination); Close Up Space (MTC); Go Back to Where You Are (Playwrights Horizons, Obie Award); From Up Here (MTC, Drama Desk nomination) and many more.

VITO DIETERLE (Saxophone) has been a featured soloist at the Burlington and Chicago Jazz Festivals, and in venues around the country. In New York he is a frequent player with composer-pianist Joel Forrester’s band People Like Us, and he leads his own trio every Sunday at Little Branch. Vito studied at The New School with jazz greats such as Arnie Lawrence, Barry Harris, Benny Powell, Lee Konitz, Reggie Workman, Junior Mance and Chico Hamilton and is part owner of the jazz supper club Silver Lining.

EBEN LEVY (Guitar) was co-leader of the ‘90s cult-favorite funk band Chucklehead and was the group’s guitarist, emcee and a principal songwriter.  Eben later led the organic/electronic funk band Ejectrode, putting out Accident Theory in ’02, and has written music extensively for film and television.

IAN M. RIGGS (Bass)  is also a composer, singer and guitarist who performs and records in and out of New York City with a wide range of artists, among them Howard Fishman, One Ring Zero, Blarvuster, Hilary Hawke, Likeness to Lily, The Lonesome Trio, Giancarlo Vulcano, and David Eggar. As a composer he has provided music for Adrian Muys’ films, Iris, and Hands of Harvest as well as for Gabriella Barnstone’s dance/theatre piece, The Dinner Party.

NO PLACE TO GO features lighting design by Ben Stanton.