Tarragon Theatre Toronto Presents Was Spring March 27 to May 6

"All that wasted time. There is no time to waste."

Toronto - Tarragon Theatre is pleased to present the Toronto premiere of Was Spring, written and directed by the multi-talented, award-winning playwright, director, actor and filmmaker, Daniel 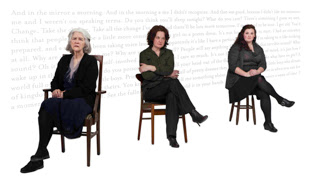 Was Spring previews from March 27, opens Wednesday April 4 and runs to May 6 in Tarragon Theatre's Extra Space. Tickets range from $24-$51 (inclusive of HST) and are available by calling the box office at 416.531.1827 or by visiting www.tarragontheatre.com

Three women clash over a tragic event in their past. Somewhere in the pain there is love, somewhere in tragedy there is meaning but when you've been betrayed by your own dreams and a lifetime's worth of guilt, can you still find it? Together, Kit (Jessica Moss), Kath (Caroline Gillis) and Kitty (Clare Coulter), attempt to reconnect and are reminded winter eventually leads to spring. Was Spring is a powerful exploration of the stories we are afraid to tell.

One of Canada's best known playwrights, and currently a playwright-in-residence at Tarragon,

Daniel MacIvor has written and directed numerous award-winning productions since he began creating theatre in 1986. MacIvor's previous productions at Tarragon include Communion (2010), A Beautiful View (009), How It Works (2007) and Somewhere I Have Never Travelled (1988).

Was Spring showcases a powerful cast of three fine actresses: Clare Coulter as Kitty (last seen at Tarragon in Good Bones by Margaret Atwood, directed by Urjo Kareda in 1999); Caroline Gillis as Kath (Tarragon: After Akhmatova; Daniel MacIvor's Communion, A Beautiful View, How It Works, Somewhere I Have Never Travelled) and Jessica Moss as Kit (Tarragon debut).