Can’t wait til November 8th? Well, then we have GREAT news for you. Come check out
Stand-Up for Estro’s early opening, November 2nd & 3rd at 8pm.

We take open submissions from around the world and are committed to providing opportunities to female artists – in a variety of disciplines – ranging from the emerging to the seasoned professional.

We’re really excited about this year’s festival (our 13th!), which will take place November 8th through December 1st at TBG Theatre in Midtown.

Founded by Fiona Jones in 2000, the festival debuted with a program of 10 short plays and music. Since then, it has grown into amulti-week event including short plays, solo shows, music, visual art, dance, stand-up comedy, teen performances and support for African girls’ education. The festival's mission is to support the development of new works and emerging artists in a variety of disciplines. We accept short play submissions from across the country and around the world, from male and female, gay, straight, transgender, white, black, Latino and Asian artists ranging in age from twelve to eighty years old. Production decisions are tempered by the knowledge that diverse contributions strengthen our artistic integrity. Similarly, directors, designers, actors and others are pulled from all walks of life and the subject matters addressed span sexual and cultural boundaries.

Theatre is, by its nature, collaborative, and EstroGenius is a showcase of collaboration at its very best. We start with a team of committed producers, and we add great scripts, inspired directors, talented actors, magical designers, supercompetent stage managers, and a flock of other support. The result is a festival that is absolutely first-rate and gets better every year. 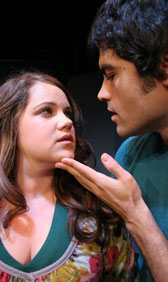 Short Plays
Our short play series anchors the EstroGenius Festival. For each week of the festival, we present the New York premieres of a series of throught-provoking short plays. Past plays have included a fairy-tale zombie apocalypse, a body dysmorphic costume comedy, a tale of two conjoined twins finding their independence, and the story of a disgruntled grandmother with wanna-be road rage. (Check the link for schedule)

Sola Voce
Sola Voce is a powerhouse program of solo shows. From hilarious to heart-wrenching, Sola Voce is a eclectic showcase of the art of solo performance. (Check the link for schedule)

Women in Motion Performances:
NOVEMBER 14 at 8pm
NOVEMBER 17 at 6pm

Stand-Up for Estro has assembled an awesome line-up of comics for your amusement.

Stand Up for Estro is back for the EstroGenius 2012 Festival! We will be featured at the Festival twice each week. 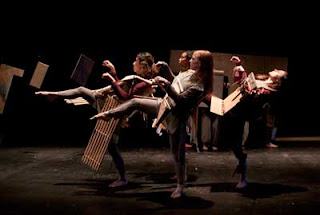 We kick of the month long festival with EstroGenius 2012 Stand-Up for Estro Opening Weekend! Friday, November 2nd and Saturday, November 3rd.  Both shows are at 8 pm at the Weist Baron Studios located at 35 West 45th Street (between 5th and 6th Avenues) New York, NY 10036.  We will have hard and soft beverages for purchase along with raffle prizes and surprises galore!