Escape from Happiness opens December 4 and runs for twelve performances at the Red Sandcastle Theatre in Toronto’s celebrated Leslieville neighbourhood.  An intense, physical, and darkly funny look at a family in upheaval, Escape features a ten-member cast and original score by Toronto singer-songwriter Kat Goldman.

Making her directorial debut is Deborah Ann Frankel, stage manager for such recent Red Sandcastle productions as Edward Albee’s Who’s Afraid of Virginia Woolf? as well as the Summerworks feature drama Breathe for Me with respected Toronto director and lecturer Ed Roy.

For Escape, Ms. Frankel draws on an estimable pool of talent. Dennis Hayes (Tom) and Margaret Lamarre (Nora) are reprising their roles here in Escape from Happiness, having first played Tom and Nora in Walker’s piece Better Living 15 years ago at the Alumni. Maria Syrgiannis (Elizabeth) can be seen in Being Erica and Dan for Mayor; Rosemary Doyle (Mary Ann) played the acerbically witty Martha in Who’s Afraid of Virginia Woolf; Kaitlyn Riordan (Gail) co-founded Shakespeare in The Ruff recently played in Third Floor and Two Gents. Tony Babcock (Junior) can be heard in Beyblade and as a host for Teletoons Network; Julian Robino’s (Stevie) recent credits include Flashpoint and Hardrock Medical. DavidHuband (Rolly) can be seen in Dream House and in his own web series Getting Down; Toni Ellwand (Dian) presently has a recurring role in Bomb Girls and her partner Greg Ellwand’s (Mike) recent credits include The Listener and Covert Affairs. 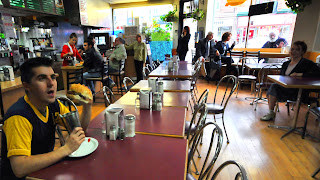 Escape from Happiness tells the story of Junior, a young man who is brutally and anonymously beaten during a home invasion.  The resulting comedic chaos of fear, backbiting, startling revelations, and a bumbling police investigation are presented “as a period piece about family strife—in the late Eighties!” says Miss Frankel.

The Red Sandcastle Theatre is located at 922 Queen Street East near Logan Avenue in Toronto’s Leslieville district.  Escape from Happiness runs from December 4 to 17, dark on Sundays.  Doors open 7:30 PM.