Toronto's Summer Favourite Returns:
Canadian Stage presents As You Like It and Titus Andronicus at Shakespeare in High Park  from June 26 to August 31, 2014
A pay-what-you-can summer series staged outdoors
at the High Park Amphitheatre

Toronto, ON – Canadian Stage’s Shakespeare in High Park returns this summer with a Shakespearean double bill at the High Park Amphitheatre (1873 Bloor St. W.), pairing the pastoral comedy, As You Like It, with the bard’s first tragedy, Titus Andronicus. Outdoors and under the stars, the plays run on alternate nights from June 26 to Aug. 31, Tuesday to Sunday at 8 p.m. Each performance is pay-what-you can, with a suggested contribution of $20. The productions are presented by Canadian Stage in collaboration with the Department of Theatre, York University. 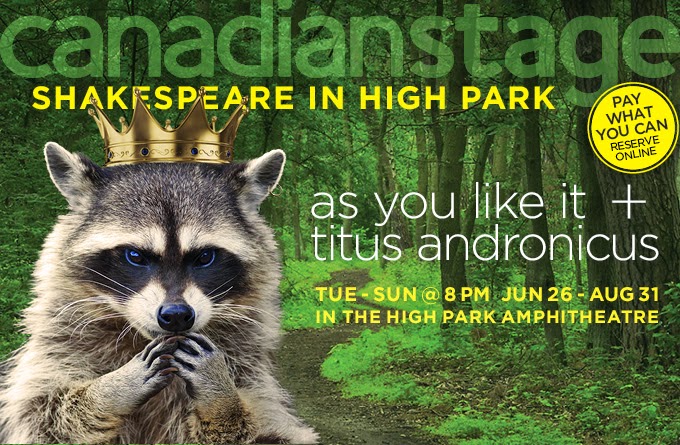 “Shakespeare in High Park is one of Toronto’s favourite summer traditions. Last year we marked a record-breaking season of outdoor theatre featuring two plays in repertory. This year’s double bill stages two very exciting and contrasting pieces from Shakespeare’s anthology,” said Matthew Jocelyn, artistic & general director, Canadian Stage. “With an exceptionally talented and versatile cast led by two phenomenal directors, Nigel Shawn Williams and Keira Loughran, an evening or two of theatre in the great outdoors is an experience that’s not to be missed.”

Shakespeare’s most musical play, As You Like It, follows Rosalind (Amy Rutherford) and Orlando (Alexander Plouffe) as they are forced into exile, separately, to the Forest of Arden. As their love story unfolds, the two become tangled in an amusing tale of lust and hidden identity. Inspired by 1950s France, director Nigel Shawn Williams creates a world where nature once again reigns, and where gender roles, politics and identity are put to the test. With original songs and music by Sam Sholdice, the play is a light-hearted examination of human nature that will make your heart sing.

In the action-packed tragedy Titus Andronicus, Shakespeare created a vicious cycle of revenge between the Roman general, Titus (Sean Dixon), and Tamora, Queen of the Goths (Shauna Black). Through manipulation and deception, these two families start down the dangerous path of mutual destruction. Turning the traditionally violent story into a thrilling cautionary tale, director Keira Loughran has created a production that is accessible to a broad audience. Marrying influences from Imperial Japan and current Japanese pop-culture, with ancient Rome – Loughran has created a fantasy world in the wake of devastating war. 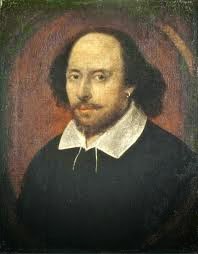 Building on the Shakespeare in High Park collaboration established last season, the creative team includes talent from York’s theatre department. Graduate students are serving as assistant directors, and undergraduate students under faculty supervision are assisting in the construction of costumes and accessories for both productions. An exciting experiential learning opportunity, this partnership gives students the chance to work alongside leading theatre artists on a professional production before graduation.

Continuing a series of new initiatives also implemented last season, Canadian Stage offers a limited number of advance premium seat reservations online and the option to pay with debit or credit at the entrance. Backstage tours, youth nights and pre-show workshops for groups are also available. Details are available at www.canadianstage.com. Pack a picnic and enjoy a night in the park! 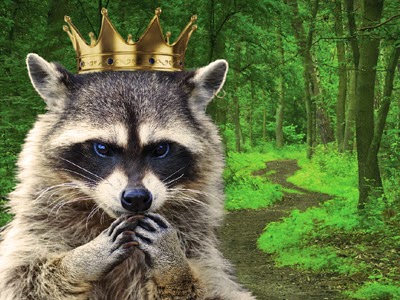