New York City Funk: Shakey Tables Release Video for 'I Like Your Shoes'

New York City Funk:
Shakey Tables Release Video for 'I Like Your Shoes'

Forming in 2013 around lead singer/songwriter Jaclyn Dima’s music, the band evolved into creating a sound all its own. By 2014, they had refined their classy three-part harmonies and high-energy, funked-out rhythm section and were being touted by local press as a hybrid of The Supremes and Red Hot Chili Peppers. While becoming known for their female-fronted, upbeat performances in and around NYC, The Shakey Tables remained steadfast at their usual haunts: Rockwood Music Hall, Bowery Electric and Arlene’s Grocery. They also found time to give back by hosting events for charity organizations such as New York Cares and raising funds for music education. 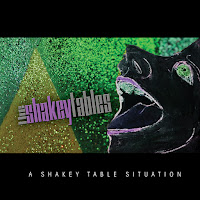 Last year the group recorded their debut album, A Shakey Table Situation, at Galaxy Smith Studios with producer Dave Brandwein, the bandleader of super funky 11-piece Turkuaz. The resulting record succeeds at presenting a fresh approach to funk that fuses influences of Motown, 50s rock, and even big band and hip hop. Add in a three-part horn section and The Shakey Tables ultimately serve up a unique, impressive style with pop appeal.

For those who prefer music with infectious melodies and harmonies, The Shakey Tables’ undoubtedly fun and sexy vibes are waiting.