An Irresistible Urge to Create: The Monroe Family Collection of Florida Outsider Art
Boca Raton Museum of Art
On view until September 5, 2021

What is real art? And who is a real artist? In our Western society, an artist is typically considered to be someone whose talent has been schooled and trained, and who makes a living through the gallery/museum and art auction system.

The rest of us might doodle along sometimes, but that's not art....or is it?

What is called Outsider Art is created by self-taught or so-called naïve art makers, and it's being given space in the mainstream art world at the Boca Raton Museum of Art in Florida this summer.

An Irresistible Urge to Create: The Monroe Family Collection of Florida Outsider Art is the most comprehensive exhibition of its kind, on view at the Boca Raton Museum of Art until September 5th. The show presents 86 works by 44 Florida outsider artists, and will be featured at three major museums over the next two years.

This is the first time a museum has presented this definitive group of artists with an exhibition of this size and scope. Against the odds, many of these artists created obsessively to escape from their worlds that were often full of personal struggles.

The show comes from the personal collection of photographer Gary Monroe, who amassed several hundred works of art by combing the state of Florida from Key West to Jacksonville to Pensacola to find what he called "Florida’s renegade artists."

"I am a working artist," explains artist and art collector extraordinaire Gary Monroe, whose collection makes up the exhibition.

He started with buying garish postcards of unusual art as a student. "When I discovered these people with no training, it complemented what we'd learned in art school."

In the catalogue for the exhibition, Gary describes meeting George Voronovsky, one of the artists, in South Beach in 1978.

George welcomed me into his room, and I entered another world. He painted remembrances of his childhood in Ukraine to cover his white walls because the empty spaces bothered him. He wanted bursts of lively colors there instead. Truth be told, the paintings transported him back to his charmed youth, far away from his troubled adult life. The images were personal and heartwarming, the kind of art that feeds the spirit. The paintings amazed me; the more I saw, the more intrigued I became.

Most of George Voronovsky’s works have never been seen before. Gary's been the custodian of his works (among those of other artists) for almost four decades.

"Before digital technology, I realized it would be better to own the art," he explains. In relatively short order, he found himself with 800+ pieces of art.

In the mid-1990s when he started his exploration of what is now fashionably called Outsider Art, there was no scene or place for it in the established world of visual arts. "There was nothing," he says. He began by documenting what he found. "I'm the most prolific non-commercial photographer in Florida."

As the search for Outsider Art took on a life of its own, he describes it as the antidote to a kind of mid-career bump - that feeling of being in search of a new source of inspiration. Gary eventually wrote a book about it which became a seminal reference on the subject. 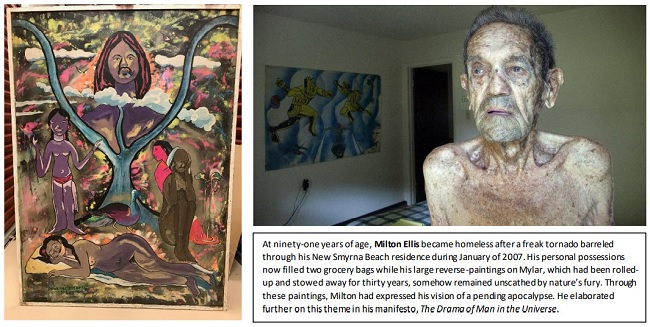 I would never discount the experience of art school or training, but it is the sense of pure expression that captivates in the collection of Outsider art - a purity that often falls by the wayside in the development of formal technique. While contemporary art is often conceptual and intellectual in nature, here, it's all emotion.

Some of their life stories are themselves extraordinary. From a media release:

Purvis Young created thousands of paintings of the Overtown inner city neighborhood. They are referred to as visual revelations of a moral vision, often painted on scrap wood. In 2018, he was posthumously inducted into the Florida Artists Hall of Fame. His work is found in several collections, including the American Folk Art Museum, the National Museum of African American History and Culture, the Boca Raton Museum of Art, Rubell Museum, the Corcoran Gallery of Art, the High Museum of Art, and the Philadelphia Museum of Art.

Do the artists see themselves as outsiders to the art world?

"Most of them don't see themselves as artists anyway," Gary says. He also sees something of the true spirit of Florida in all its independence in their practices.

In contrast with times past, Gary says his recent experience in Boca Raton was welcoming, and he mentions Art Museum Executive Director Irvin Lippman as being especially receptive to the show.

"They've been astonished," he says of the reaction to his collection. "They are floored by the unfettered emotionalism of it." Media response has been overwhelming, with many caught up in the spirit of the works.

"That spirit is central to being an artist," he says of the artists' ability to tap into their emotions so directly. There's another aspect for collectors to consider. "This work is still affordable."

That may change, however, if the show continues to garner as much attention as it has so far. Gary mentions The Highwaymen, a group of Black Florida artists who similarly began in obscurity and have seen the value of their work rise to several thousand dollars a piece. "I've watched them become integrated into the art world," he says.

Still, success can be a double-edged sword when the charm of the work lies in its spontaneous creativity. "It can lose its sense of urgency," he says.

Expression vs. technique - it's the balancing act that every artist has to contend with; how to take pure expression and turn it into something others can experience visually.

"For these artists, making art was as essential as breathing," says Boca Raton Museum of Art Executive Director Irvin Lippman. "Their artistic freedom was a pure, sincere and intimate means of communication."