— Including the Quad and BAM in NYC
— The Cinematheque in Vancouver, BC
— Among others...

Multi-hyphenate, multidisciplinary artist Saul Williams brings his unique dynamism to this Afro-Futurist vision, a sci-fi punk musical that’s a visually wondrous amalgamation of themes, ideas, and songs that Williams has explored in his work, notably his 2016 album MartyrLoserKing. 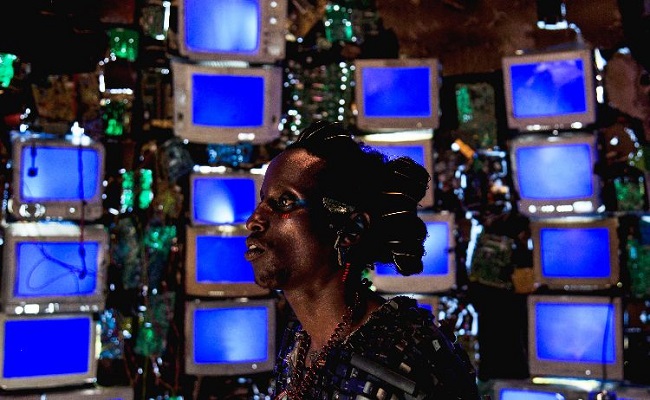 Co-directed with his partner, the Rwandan-born artist and cinematographer Anisia Uzeyman, the film takes place in the hilltops of Burundi, where a group of escaped coltan miners form an anti-colonialist computer hacker collective. From their camp in an otherworldly e-waste dump, they attempt a takeover of the authoritarian regime exploiting the region's natural resources – and its people.

When an intersex runaway and an escaped coltan miner find each other through cosmic forces, their connection sparks glitches within the greater divine circuitry. Set between states of being – past and present, dream and waking life, colonized and free, male and female, memory and prescience – Neptune Frost is an invigorating and empowering direct download to the cerebral cortex and a call to reclaim technology for progressive political ends.

Saul Williams is an American poet, musician, and actor. He made his acting debut in Marc Levin’s Slam, which he co-wrote. The film won Sundance's Grand Jury Prize and the Cannes Camera D'Or in 1998. Saul was a series regular on Girlfriends and has appeared in films including: K-Pax, Lackawanna Blues, New York, I Love You, Akilla’s Escape (TIFF 2020) and Alain Gomis's TEY, which won 2013's L'Etalon D'Or at FESPACO. He has published five books of poetry and as a musician, has released six albums and collaborated with artists including: Janelle Monae, Trent Reznor, Nas, Massive Attack, Erykah Badu, and more.