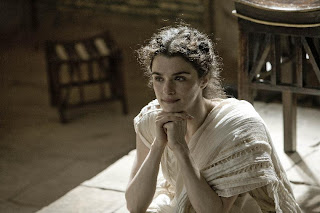 It's 4th Century A.D. in Alexandria, Egypt, one of the last bastions of a Roman Empire that's crumbling from within due to a number of elements, and the film makes clear that one of those elements is the growing early Christian movement. In the city's legendary library, Hypatia, played by Rachel Weisz, a Platonic philosopher, mathematician and astronomer of the old Roman order teaches her pupils and acts as guardian of the city's store of knowledge until the Christian hordes - who, like any revolutionary movement of the disenfranchised throughout history, have more or less degenerated into a mob thirsting for revenge - come to destroy it.

Don't let the film's two hour runtime, or the weighty subject matter that touches on the nature of philosophy, religion, and humankind itself, put you off. Be patient during the first few scenes that seem somewhat formulaic; set up, exposition, impossible love triangle between Hypatia, adoring student Orestes and her slave Davus (Minghella), and so on. As the story unfolds, after Hypatia is left to her teaching and research with what she's been able to salvage from the library, that formula is fleshed out in solid performances and a story that weaves the lives of Hypatia, former students who've taken up prominent places in government and the burgeoning church hierarchy, Davus, who becomes one of the church's thuggish enforcers, and others into a portrait of an era in flux. As the tide of Christianity rises, its early leaders flex their leadership muscles with increasingly violent and intolerant results, (with a particularly stinging indictment of the personnage we now know of as St. Cyril of Alexandria, played by Sami Samir, pictured below,) but no group comes off particularly well here. From the old Roman pagans who convert en masse only when it's clear they can no longer continue in their position of privilege, to the Jews who eke out bloody retaliation of their own, the film takes a dim - and historically accurate - view of the tribalistic nature of them all. Even Weisz's sympathetic Hypatia is not without her flaws. 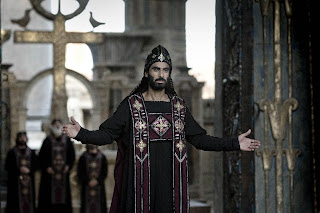 I've been in love with Rachel Weisz since the Mummy movies, and I can think of few (if any) other actors who could imbue the role with the necessary intelligence and humanity. There are several scenes where Hypatia ruminates on and tests her various theories, and Weisz brings them to life with a kind of single-minded and bright eyed fascination that's entirely convincing. She never takes a false step here. Also strong is Oscar Isaac as Orestes, the former student who becomes Prefect of the city, hopelessly in love with her and doomed to watch, powerless, as events spin out of even his control. The visuals are sumptuous and obviously big budget, with a cast of hundreds, period costumes and lushly recreated scenarios. One quibble though - I couldn't quite grasp the significance of the repeated earth-from-space shots, they seemed incongruous. (teaser below)

It's a thought provoking film that poses questions about the penchant of human society to rebel against the moderating and rational voices of reason and learning with the volatile mob mentality of religious intolerance which resonate to this day. Many of the characters are actual historical figures, including Hypatia herself, and while little remains of her work or theories, there are indications she was onto a theory of the elliptical nature of planets that orbit around the sun about 1,200 years before Kepler's "discovery".