"It has everything: betrayal, death, God... sex." So says Sasha (Israel Damidov, in seond image below) the young teacher Bruriah meets in looking for a lost book. He's speaking of another Bruriah, a legendary Talmudic figure, and not coincidentally the subject of the very same book it turns out they're both tracking down. That kind of story within a story within a story pretty much illustrates the structure of this very interesting Israeli film that brings to light one of the lesser known figures of Hebrew legend as it gently poses questions of well, betrayal, death, God... and sex. 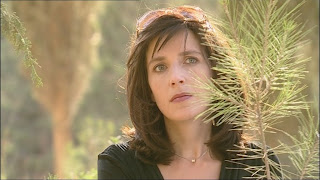 Bruriah in the present day is played by London-born actress/ screenwriter/ playwright Hadar Galron as an observant woman in an Orthodox family. She wears a wig in public and dresses modestly, but exists in the modern world where she has friends who gleefully strut in sequins and miniskirts. The role of women is the central issue that begins to create friction in her happy marriage and family life, as the death of another Rabbi reignites her passion to find the long lost book penned by her father - the book for which he and Bruriah both were actually excommunicated.

In Hebrew legend, Bruriah was a sage who was both the wife and daughter of Rabbis, renowned for her knowledge and wit. Even in the face of her obviously respected position, however, her husband, Rabbi Meir, adhered to and taught his students the Talmudic assertion that women were "light minded". Bruriah challenged the notion, and to prove her weaker nature, Rabbi Meir sent one of his students to seduce her. After his many entreaties, she relented, but later, in shame, killed herself, and the horrified Rabbi ended his days in self imposed exile in Bablylonia. 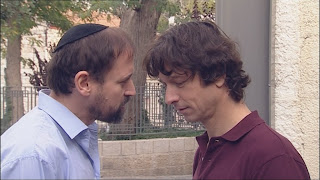 If Bruriah's the protagonist of the film, it's her husband Yakov (Baruch Brener, left in the image) who is the lightning rod for the film's essential question, or problem - the intersection of the absolutes of Orthodox faith with the emotional realities of living as a human being, and it's that central theme that resonates with a reach that goes beyond the confines of Judaism. He and his colleagues monitor the new teacher's "Jewish philosophy" class to make sure its curriculum doesn't fall outside prescribed bounds, and one of them frets about schoolgirls singing in front of grown men. Yet, he's also a man whose teenage daughter wants to attend rabbinical school even against his wishes, and whose wife, as he notes with increasing alarm, seems the embodiment of the story with its sad ending, particularly after the attractive and younger Sasha enters the scene. Brecher does a fine job of conveying both his sense of conviction and the deep love he has for his wife.

Despite that, overall the film lacked somewhat in emotional content. We seldom feel the passions that drive the characters, except towards the end. There are lots of scenes of people discussing ideas, and while intellectually interesting, I think I was looking for a little more emotional engagement. You'll find the story engrossing, albeit with an appeal more to your head than your heart.

It is to be noted that there are historians and scholars who dispute this tragic version of of the Bruriah legend, and as a figure she's most often regarded as a symbol of righteousness - in fact, Orthodox Rabbis often name their daughters after her for that reason, as did the fathers of both Bruriahs in the film.

It's being screened in a special presentation to kick of the 18th season of the Toronto Jewish Film Festival at a time to honour the time of reflection between Rosh Hashanah and Yom Kippur - see details below: