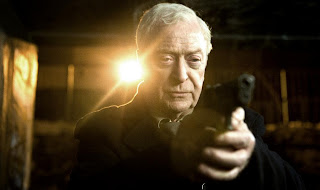 About 15 minutes into Harry Brown, you'll think you know pretty much exactly what's going to go down. Caine, inhabiting the role as only he can, stars as Brown, a weary pensioner living in a dreary "estate" apartment somewhere in a grimy corner of urban U.K., whose days consist of hopeless visits with his failing wife at her hospital bedside and afternoons at the pub playing chess over a pint with his friend, Leonard (David Bradley). He goes the long way around when the thugs who have more or less taken over the estate threaten from an underpass, and shuts the curtains when they mob and assault a man while stealing his car underneath his window. He listens in horror as his buddy talks about living in fear of their harassment and threatens revenge. It's been mentioned in casual conversation that Brown is an ex-Marine, so when his wife passes away and Leonard dies in a skirmish with the criminal element, you'll be thinking oh yeah, now it's payback time. But this is no cartoonish Steven Seagal outing, and the film's genius lies precisely in taking those familiar elements and truly surprising you with their outcome.

How does one believably get from feeble senior citizen to efficient instrument of deadly revenge? To start with, by casting Caine in the role. One of the real treasures of the cinematic world, he goes from glassy eyed confusion to steely ex-military with consummate acting chops, and he's helped by a strong cast, from the actors who play the brutish thugs who've taken over the block to Emily Mortimer's police detective inspector, cast as the lone voice of reason and whose character naturally pays dearly for that quality. The foundation is a great script, one that takes a fresh approach to the well worn genre. It unfolds in a chain of events that seems entirely believable - never false or contrived. The police investigation into first Leonard's murder and then the growing body count gets caught up in obtuse police politicking that accelerates the violence, bringing it to a conclusion you won't anticipate.

Cinematography is the third element working towards the film's strong impact, shot in an intimate style that veers as close as the pores on Caine's face, and sometimes in jittery, hand held sequences like the opening scene, where we join the neighbourhood thugs on a drug-fueled spree of violence with a breathless view from the backseat (see clip above). It's a taut, expertly crafted drama/thriller that delivers on every count.

From a media release: FABnyc Announces 2018 Artists in Residence NEW YORK CITY - FABnyc (Fourth Arts Block) is thrilled to announce the FABnyc Storefront Artists in Residence for 2018! We had over fifty applications for our very first residency program in our storefront space and were humbled to receive many strong applications by a wide range of artists. Chinatown Art Brigade will be on the block into the spring developing Placekeeping - Here to Stay a multilingual, multimedia project that will feature short video and audio stories of tenants who live in the rapidly gentrifying neighborhood of Manhattan’s Chinatown and LES. A projection from CAB's Here to Stay series and Untitled (Carl Beam), 2017 by NADI Additionally we are announcing that Native Art Department International will be in residence at the Downtown Art building into the summer thanks to a collaboration between DTA and FABnyc. We are excited to host them as they develop Expanding the Scope, an effort in sol

Italian Jazz Trumpet: Giancarlo Romani - Naif (AlfaMusic / December 2020) Buy or Stream from your fave service I f you love contemporary Italian jazz - and what's not to love about it? - you'll groove to Giancarlo Romani's Naif. It's music that is rhythmically complex and challenging musically, and also melodic and accessible.  Romani uses the trumpet's melody and tone in a variety of different modes and moods that keep it interesting. Here, he's ably backed up by Gianluca Massetti on piano and Fender Rhodes, Giuseppe Salvaggio on electric bass, Jacopo Ferrazza on upright bass, Giampaolo Scatozza on percussion. Guests include Francesco De Gregori on harmonica, Francesco Bearzatti on tenor sax and clarinet, Simone Pulvano percussion, Nuna Shoesmith vocals, Pierfrancesco Cacace soprano & tenor sax, and Amos Vigna Sax on tenor sax. The long time horn player talks about the genesis of his solo album after years of playing gigs all over in a media release. “The i

From a media release: Hot Docs Film Festival Screening Online April 29 to May 9 2021 Check Out The Full Line-Up/Buy Tickets Hot Docs is fast approaching, when you can check out some of the world's cutting edge documentaries online this year. All films will be available for streaming starting at 10:00 a.m. EST on April 29, 2021. Here's a look at three of the many movies available to view. It Is Not Over Yet Director: Louise Detlefsen Synopsis : IT IS NOT OVER YET is an immersive, life-affirming journey into the day-to-day rhythm of a controversial nursing home for people with dementia in Denmark. The founding nurse of Dagmarsminde, May Bjerre Eiby, has no interest in specific dementia diagnoses or medicine since neither improves the quality of life for her 11 residents.  Instead, she and her staff have developed a new kind of treatment inspired by the methods introduced by Florence Nightingale 150 years ago, as well as Danish philosopher Løgstrup. ‘Compassion Treatment,’ as Ma