With its pink and red décor, velvet curtains, stripes and brocade, Lula is just the right name for this cool west end lounge with hot Latin music in the unpretentious Little Portugal/Little Brazil neighbourhood. It seemed also just the right setting for the sultry "Latin fusion" of the Joaquin Nunez Hidalgo Quartet. 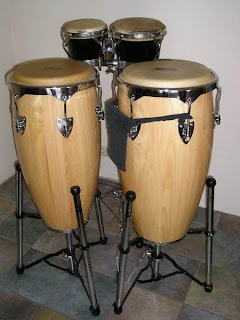 Hidalgo's a master percussionist, and he moved easily from drumset to drumset as the heart of the ensemble, rounded out by Yoser Rodriguez on stand up bass, Jorge Betancourt on keyboards and Gareth Burgess on steel drums. As Hidalgo explained it, a trip to Trinidad turned him on to the sweet chimes of the steel drum, dulcet tones that he puts into a mix of swelling Latin rhythms and Afro-Cubanized jazz standards, along with exotica like a duet between steel drums and calimba, a handheld South African instrument. After the show, Hidalgo explained to admiring fans that the group had been playing together a long time, but he didn't have to - you could see it in the easy flow of the music and the way they were obviously having a good time. There were some eye popping solos all around, with Betancourt being a stand out - but there were no weak spots here.

There was a good and very mixed crowd out for the early show on Friday night. All the tables were full, with many dining from what smelled like a delicious parade of dishes from the kitchn, and by the end of their set it was standing room only at the long bar.