My Queen Karo (a TIFF preview) 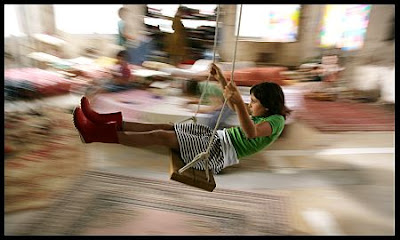 One of the joys of the Toronto International Film Festival is that it brings the opportunity to see cool films you'd never otherwise see in your local Cineplex, and My Queen Karo - a Dutch/Belgian offering that will have its World Premiere at TIFF - is just such a gem. A thoughtful, character based film, the story follows the (mis)adventures of a motley crew of hippie-squatters in 1974 Amsterdam through the eyes of Karo, a ten year old girl who arrives from Belgium with her father Raven and mother Dalia.

It's Déborah François who headlines the credits as Dalia, (a gorgeous rising Euro star who had a breakout film in 2005 with Jean-Pierre Dardenne's l'enfant,) but this is entirely Anna Franziska Jaeger's film in the role of wide eyed Karo as she quietly observes the world of adults around her. Van Den Berghe immerses us in the squatter culture of the times, with its ragtag, impractical philosophies and the realities of living in makeshift surroundings with only cold running water and stolen clothes and furnishings. At first, the group lives with no walls, sleeping in a communal bed where sex between any number of people might erupt - even with a child on board. But things start to disintegrate when Raven brings another woman and her children home (Maria Kraakman's Alice,) exposing Karo to the seamier realities of human nature.

The film has a definite "Euro" look about it, and by that I mean it eschews the glossy veneer of Hollywood for a very clear eyed and intimate view of its subjects and their world. Its sensibilities are also European, featuring plenty of nudity - including the children - and non-graphic sex, things that would send modern North American censors into hyperdrive. I have to say I much prefer this view, one that sees all these elements as fundamentally normal and part of ordinary human existence.

Karo begins to see through the frailties of her adult keepers, becoming the parent on more than one occasion. You could see the film as something of a polemic on the self serving bullshit inherent to most utopian leftist movements, and their ultimate futility, although Van Den Berghe's non-judgmental take favours neither the squatters nor their frustrated landlord. You could also see it as a look at the confusion and moral dilemmas imposed on children by dysfunctional, laissez-faire parenting, (and I put it to you that anyone who teaches their children it's morally wrong to pay for anything is not doing them any favours!) In the end, though, it's about the eternal desire of maturing children to leave the nonsense of the adult world behind them and carve out a life of their own.

From a media release: Touch-Screen Samba and Joystick Roots: Percussivo Mundo Novo Channels Cascading Brazilian Beats and Smiling Cyberfunk on North American Tour, July and August 2011 The first of the cyber-Mohicans hits the stage, shredding like a rock star on a touch-screen tablet melded with a Guitar Hero controller-and creating a huge chorus of Brazilian rhythm . With a three-foot tall Mohawk and the blessing of the spirits, he and his crew invent new instruments for ancient roots: the rumbling joys of Afro-Brazilian beats, the rolling pulse of samba, and the deep presence of candomble. Meet Percussivo Mundo Novo, led by producer and delightfully mad inventor Mikael Mutti. Mixing re-imagined traditional drums and video game controllers, the group brings spirit guides, stunning musical virtuosity, and catchy futuristic visions to North America for the first time this July and August, 2011. PMN's sound sparkles with laser-sharp solos played on apps and with a resoun

From a media release: Art Glass: Glasstress Boca Raton 2021 On view until September 5, 2021 Check It Out From Europe to America, the world premiere of this major international show has landed on the shores of the U.S. after three years of preparation. "Glasstress 2021 Boca Raton" is on view through September 5th -- featuring free virtual programs for the global public to enjoy online. Among the 34 artists in this new exhibition: Ai Weiwei, Fred Wilson, Joyce J. Scott, Jimmie Durham, Ugo Rondinone, Fiona Banner, Vik Muniz, Monica Bonvicini, Jake & Dinos Chapman, Laure Prouvost, Renate Bertlmann, Thomas Schütte, and Erwin Wurm. Most of these works have never been seen elsewhere. Three years in the making, with 2020 being such a challenging year to coordinate an international exhibition of this size and scope due to the pandemic, this effort serves as an important reassurance that art is an essential and enduring part of humanity. This Glasstress 2021 exhibition is also a tr

From a media release: NEW YORK ART GALLERY, ARTISANWORKS , ACQUIRES CONTROVERSIAL COLLECTION OF PAINTINGS FROM CANADIAN ARTIST VIKTOR MITIC ARTISANworks in Rochester to Debut Art or War Collection Toronto, ON – Rochester, NY May 26th, 2015:  Canadian contemporary visual artist Viktor Mitic’s painting series Art or War makes its U.S. debut in Rochester, New York after the acquisition of fifty eight pieces of the series, including his much talked about ‘Incident’, the shot up school bus sculpture which toured Washington DC in April of 2013 during the height of the U.S. gun debate.  Mitic is best known for his controversial approach to art, firing live ammunition at images he has painted of celebrities and iconic personalities.   His bullet-riddled paintings offer an acerbic commentary on society’s attitudes towards guns and violence and its obsession with fame.  Moved by the destruction of the giant Buddhas of Bamiyan - ancient sculptures created in the 6th century –Viktor Mitic started