Suck picked up by Alliance

on September 08, 2009
Alliance Films Sinks Its Teeth Into SUCK

And Kick Starts Sales At TIFF 09

From a press release - my review in an earlier post here 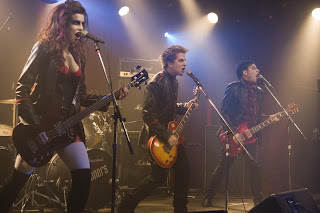 (September 8, 2009 – Toronto) Alliance Films and Rob Stefaniuk’s rock ‘n’ roll vampire movie SUCK are set to take a bite out of the Canadian market after Alliance snapped up distribution rights in advance of the film’s TIFF world premiere.

“We’re very excited that Alliance has come on board to release SUCK,” says Producer Robin Crumley. “It is great to know that our film is with such a respected and broad reaching distributor.”

“All any filmmaker can hope for is that his or her film will find an audience,” adds writer, director, actor, musician Rob Stefaniuk. “Having a major Canadian distributor like Alliance onboard guarantees our film has a real chance at finding that audience.”

Seemingly doomed to road trip doldrums and dives, the band The Winners breaks its slump when its female bass player (Jessica Paré) disappears one night with a hip vampire. She returns charged with sexual charisma that creates audience frenzy and eventually ensnares the rest of the band to trade their souls (literally) for fame and fortune.

Shot in Toronto last November, the much anticipated film has been creating buzz since the first day of shooting, and will have its world premiere, Friday September 11, at The Varsity Cinema, 9:30pm.

“SUCK is a fantastic combination of vampire comedy and the best rock and roll ever. We’re pleased to be able to introduce the film to Canadian audiences”, said Noah Segal, EVP of Alliance Films.