on September 15, 2009
In conversation with Dorothée Van Den Berghe (writer/director) & Matthias Schoenaerts (actor - Raven) from the enjoyable flick, My Queen Karo, which received its World Premiere at the Toronto International Film Festival.

Check out my review here for more background on the film and story, and the trailer here. As a writer, Van Den Berghe used her own experiences to flesh out the details of squatter culture in Amsterdam in the mid-seventies. Like Karo, she arrived with her parents from Belgium and grew up in those heady days. 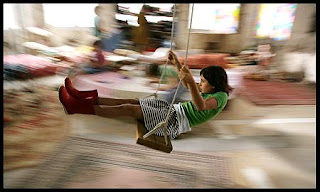 ACM: One of the things I thought really succeeded in the film was that it really seemed to capture a 10 year old girl's point of view - without actually being a film for children. How did you approach that aspect of the film?

Dorothée: The main reason I wanted to use that point of view is that it's such a complex thing to talk about, the 1970's. I would have had to make an elaborate documentary, social research... This way, I have a very specific angle, a very specific view of that time.

ACM: As an actor, you've played a wide variety of roles. What drew you to this project in particular?

Matthias: First of all, it's the second time we've worked together. I made another film with Dorothée (2002's Meisje), so to work together again was a heartwarming experience. I was also fond of the script. While I didn't experience it, the 1970's, I tried to inspire myself by reading up on the art and music of the period.

ACM: How did you come to find such a perfect actress (Anna Franziska Jaeger) to play Karo, who really is the centre of the film?

Dorothée: It's a long story! I saw her in a shop and I knew it was her, she was exactly what I wanted. I really followed this girl, and (kept tabs on her). The film took two years to put together, and by that time, she was too old for the part as I had written. She had breasts already, and the part I had written was definitely for a child who was younger than that. So.. I held auditions and auditions, but I never found that quality, what I found in her. I rewrote the script, then, and we had to rethink how to shoot the nudity, for example, because of her breasts. But I think it puts the film into a better perspective, a child that age.

ACM: True - a preteen has the awakenings of discerning judgement, and will begin to question the world of her parents.

Dorothée: What you felt, while you were shooting, is that she really understood it - not the time period, not exactly the same, but the idea of parents living separate lives.

ACM: That's certainly what resonated with me as well, the idea of a child maturing, seeing her parents' frailties and wanting to go her own way, something that connects with modern audiences as well. I have to tell you, while I was watching it, with my North American sensibilities, I felt like something really terrible was about to happen towards the end. If this were a North American film, it would have been a morality play - people would have died or something..

Matthias: Exactly, that's the strength of the film. It's a time document - une tranche de vie - an honest one. I was impressed with the energy of those times, I tried to capture that.

ACM: I like how nuanced it was. Even with your character, Raven, who can certainly be seen as unsympathetic, it wasn't a black and white portrait.

Matthias: No, there was true love involved, that was authentic, love for his first wife, his second wife, and for the child. Certainly, he was selfish..