Athena Karkanis may not be a household name just yet, but if you're a horror fan, you'll recognize her as the determined Agent Perez of the Saw film franchise. At the Toronto Film Festival this year, she also starred in George Romero's Survival of the Dead, which got its North American Premiere (just days after getting rave reviews in Venice) in a Moonlight Madness screening September 12.

"That film was maybe one of the hardest I've ever done," she says. "It was six weeks, all exterior shoots, all night shoots - one was in a field of mud!" Still, working with a living legend like George Romero had its perks. "In spite of all that, I had a wonderful time," she enthuses. "I was somewhat intimidated by the idea of working with him at first. We met on the first day of shooting - he wasn't at my casting audition - but he was the warmest, friendliest guy. You feel good in his hands. You don't get the sense that he's a living legend at all. It's very refreshing, amazing that he's not jaded. He'd be up pulling all nighters with the rest of us, coffee and cigarette in hand." 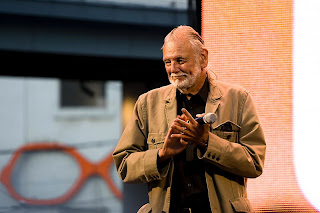 (image of Romero above by Josh Jenson of Toronto, taken September 12 at the TIFF Moonlight Madness Premiere)
While she loved working with Romero, the story itself also appealed to her. "In his films, the zombies are never the bad guys," she explains. "They can't help it. It's always about the human struggle." 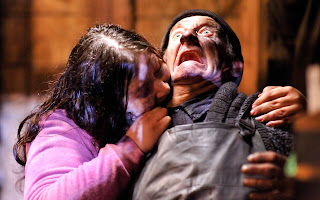 With her combination of beauty and no nonsense, tough minded smarts, she seems a natural for those sorts of active roles. "I'm not overbearing though!" she protests with a laugh. "I do have something of that quality - when you do an audition, they see that in you." She's realistic about choosing her roles. "You're limited (in that respect), first because I'm a Canadian actress, second I'm just starting out. You can't be crazy selective, but I try to pick roles that will put me in the direction I want to be."

So does she watch horror movies herself? "It's not my cup of tea," she confesses, "but they're fun to work on!"

Born in Alberta, Karkanis' parents worked in international development, and so she was raised in 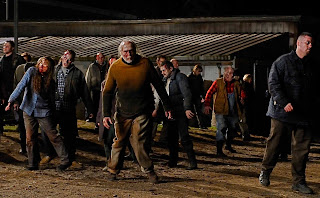 various locations all over the world. She majored in political science at McGill University before heading to NYC to study theatre, and easily made the transformation from teen to adult roles. Her resumé also includes starring opposite Wesley Snipes in The Art of War 2, and she'll be hitting the stage at Toronto's Berkeley Street Theatre in That Face on October 26, along with Sonja Smits and Nigel Bennett, who she previously worked with in the TV series The Border.

Here's a clip of Karkanis as Special Agent Perez in Saw IV.

Killed off in Saw IV by a protégé of the Jigsaw killer, Agent Perez still showed up in Saw V. Will she return in Saw VI? If I told you, I'd have to kill you myself.... but whether Karkanis is in future Saw movies or not, it seems clear we'll be seeing lots of this talented actor in the years to come.