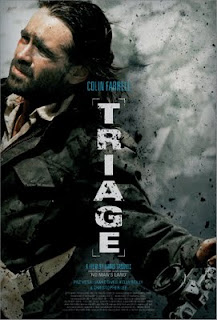 Damn you Colin Farrell for making me cry! If you're going to the Toronto International Film Festival at all this year, Triage is a must see, a truly engrossing film that features masterful storytelling and nuanced, completely convincing performances; one that tackles some of the darker realities of human existence with a view that seems entirely authentic, and truthful in a way that mainstream films so very seldom are.

Farrell plays Mark Walsh, a cocky freelance combat photographer as the story (but not actually the film itself) begins. Along with close friend and partner David (Jamie Sives), he's in Kurdistan in 1988, just as Saddam Hussein's campaign against the Kurds is heating up. They find themselves in a kind of military hospital being run out of caves, with no running water or heat, and Walsh shoots away furiously with his camera as ambulances bring the mangled, bloody wounded, although it's clear David - whose wife Diane (Kelly Reilly) is expecting their first child - has lost his taste for chasing that next headline image. Even Walsh is taken aback, though, when makeshift orderlies bring the most grievously wounded outside and Dr. Talzani (Branko Djuric), the lone medic, shoots in the head those who are too far gone to survive on his meagre resources and stretched capabilities rather than prolong their suffering. Walsh ends up returning to Dublin alone, wounded, with David's fate a mystery that slowly unravels through his tortured recovery. 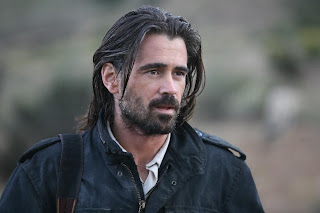 I don't want to give away much of the plot, told skillfully through flashbacks and images. The film actually begins somewhere in the middle, with a wounded Farrell being taken back to the medical cave/hospital for treatment, crisscrossing back and forth in time. It unwraps layer by layer to the very last scene, and you truly won't know what happened on that fateful trip until then - always my test of a superior plot. If the story is superior, (based on Scott Anderson's 1998 novel of the same name,) it's the wonderful performances that bring it to life. Farrell is riveting as Walsh, the tough guy who thinks he can keep both his worlds separate - the bloody battlefields scattered across the globe, and the comfortable apartment he shares with his loving wife. But the performances are uniformly strong all around, from Djuric's war weary medic, a voice for the travails of the Kurdish people, even to the small, uncredited role of an African widow/survivor in one of Walsh's anecdotes. She speaks only two words, but her very posture conveys the woman's sorrow. 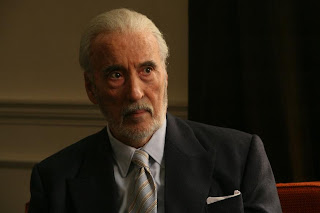 Somewhat astonishing is Christopher Lee (yes, he of the cheesy Dracula movies!) who is entirely convincing as Spaniard Joaquín Morales, a former therapist to Franco's Fascists and the grandfather of Walsh's wife, whom she reluctantly calls on for help when Walsh's veneer of business-as-usual develops serious cracks.

Triage is the process used in medical and other emergencies to determine the relative seriousness of illness and injury. In modern hospitals, those who are the most at risk get help first, while in Dr. Talzani's world, they are offered only a quick death. As many of the characters in this film have to tell us, we all have to find ways of dealing with the very finite limits of our own powers and influence, along with the fallout that those limitations incur.