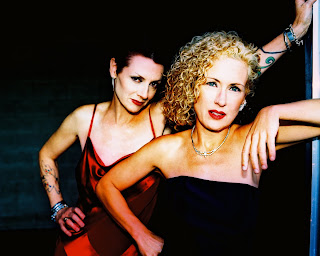 You can check out the newly renovated Centre for the Performing Arts in Richmond Hill along with an evening of cabaret style entertainment with Mezzo Soprano Jean Stilwell and pianist Patti Loach all at the same time this Saturday, October 17 with Carmen Unzipped. The show will open the Classical Music Series at the gorgeously refurbished venue. (Both images by Ian Brown - Ms Stilwell in red, Ms Loach in black.) 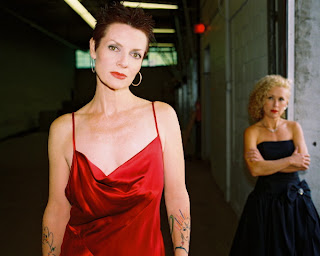 Stilwell's flare for high - and sometimes outrageous - fashion is hidden from view during her "other gig" as half of the morning team at The New Classical 96.3FM, (the other half being Mike Duncan), but will be in full view and full force for the evening, along with her stellar pipes in a show that combines pieces from Kurt Weill and Edith Piaf, Moose Charlap, Maltby and Shire with more contemporary songwriters from New York's cabaret scene such as John Bucchino, and Goldrich and Heisler. Naturally, the performance will also showcase Stilwell's mastery of the role of Bizet's Carmen - she's performed the role of the gypsy in close to 30 productions on three different continents! The two will be joined by trumpeter John Loach as well as David Bourque, who plays clarinet with the Toronto Symphony, and Rex Harrington (Artist-in-Residence for the National Ballet of Canada, and guest judge on "So You Think You Can Dance"). It will be Stilwell's last show in Toronto before leaving for a month of performances in Dominick Argento's opera, "Casanova's Homecoming" with Minnesota Opera, with fellow Canadian John Fanning in the role of Casanova. Diva Stilwell is known for an evocative style that blends strength and vulnerability, along with a formidable range and vocal colour, a great sense of immediacy and, always, a wicked sense of humour, all aided and abetted by Patti Loach at the piano, who wrote the show.

The architects for the Richmond Hill Centre's recent renovation were Diamond Schmitt, the same group who designed Toronto's Four Seasons Opera House. By all early reports, the hall is visually beautiful and the acoustics, spectacular. Add to the equation an excellent concert grand piano, and a state of the art sound and light system, and it all adds up to a great evening out.