on October 20, 2009
Codetalkers of the Digital Divide (or why we didn’t become “roadkill on the information superhighway”)
A Space Gallery Toronto - on view to October 24

A Space Gallery was packed on October 16 to hear the curator and artists from Codetalkers of the Digital Divide talk about their work, lending a festive energy to an event that was part of the imagineNATIVE Film + Media Arts Festival. The second half of that equation was well represented in a wide variety of works that took advantage of the possibilities of the digital realm. 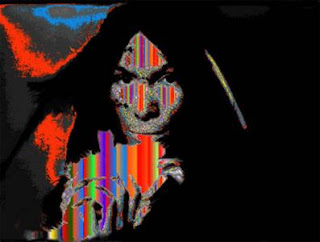 Singer/activist and Academy Award winner Buffy Sainte Marie's digital prints gave the show its iconic images, including three large prints from her Painting with Light series. Completed in 1994, Sainte Marie used early versions of digital imaging software like PixelPaint and MacPaint to add shimmering layers to archival and more recent photographs, as in her self portrait pictured here.

Jason Lewis, primarily a "text based artist" as he described himself, created the ingenious What They Speak When They Speak To Me. Of mixed race and with a resulting caramel coloured skin, as Lewis told the story of the work's inspiration, during travels around the world, people from Samoa to South America simply assumed he was native, one of them, and spoke to him in their native tongues. You'll see his piece if you follow the link, and as you move your cursor around, words and lines will begin to follow the movement, pulling text out of the black screen.

Isuma TV (Igloolik Isuma Productions,) being Zacharias Kunuk and Norman Cohn, the team behind 2001's groundbreaking Atanarjuat: The Fast Runner, (now actually part of a trilogy of Inuit language films,) had the most ambitious plans and scope. Isuma TV is their web presence, dubbed the "Aboriginal youtube", and it does operate basically the same way, currently offering 1,000 films in 30 languages, including 40 Igloolik Isuma Productions. It makes indigenous cinema accessible to the world, and a world that wants to experience it, if millions of hits on the website are any indication - with one irony that Cohn noted. "About 80% of aboriginal people live in isolated communities.. where global warming will come before they get broadband." Their ingenious solution? As Cohn describes it, the plan is to set up a series of local servers with www.isuma.tv loaded onto the server itself, making it accessible at high speed to those isolated communities.

High tech ingenuity and the eternal appeal of storytelling - those were really the two themes throughout this interesting show.