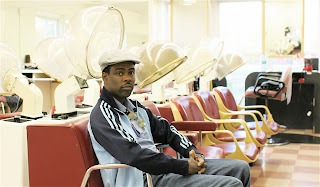 And I should clarify - it's a revelation if you're not of African descent. If you're black, and especially if you're a black woman, the vast amounts of cash poured into this industry will certainly be no revelation to you. One of Chris Rock's adorable little daughters came to him one day to demand "Daddy, how come I don't have good hair?". Good Hair the movie is the result of his quest to answer that question, and Rock travels from beauty salons to barber shops, laboratories to beauty schools, and even to India to look at the issue from many angles. Like all good docs, it covers not just the intricacies of black haircare - from toxic relaxers to perms that burn to elaborate weaves that start at a mere $1,000 (with weekly upkeep!) - but looks at how all that high maintenance impacts lifestyles, incomes, the relationships between black men and women and more. 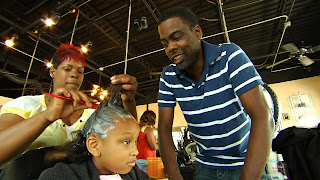 Naturally, it's a race thing. The soft, silky, sleek hair of Euros and Asians is seen as not only the norm, but the only acceptable look. Just try to think of one single African American female celebrity who doesn't have straightened locks! Letting nappy hair be nappy is seen as a loss of credibility, especially in the job market, it's an automatic political statement that you have to explain and justify. If that doesn't make you squirm, then how about this - the industry itself is 80% run by white and Asian interests, and the masses of sleek, straight black hair used in all those weaves comes directly from India. Rock visits a temple where shaving one's head is a religious act of ritual humility, and the temple sells the hair, making them second only to the Vatican in religious revenues. There's even a black market, selling product garnered by cutting it off unsuspecting women at opportune times (like when they're sleeping).

A slew of celebrities dish on their haircare histories, among them Dr. Maya Angelou, Eve, Salt n Pepa and the Reverend Al Sharpton, and he follows the adventures of competitors in Atlanta's Bronner Bros' International Hair Show. It's funny, and it certainly has its bizarre moments as it offers up some truths about race, the sexes, business and more. If you're not black, you'll be amazed, and if you are, you'll undoubtedly chuckle as you identify with the stories being told, and giggle at your non-black friends and their incredulous reactions. A revelation indeed.

Check out the official trailer here. The film opens October 9 in selected cities in the U.S. & October 16 in Toronto, Vancouver and Montreal, then October 23 for national release in the U.S. - check movie listings for details.
african american documentary black haircare chris rock documentary