I'm in a play - Shameless Self Promotion 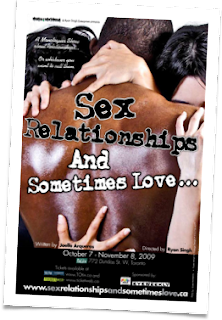 So I'm in a play, a monologue show called Sex, Relationships And Sometimes ...Love, written by Joelle Arqueros and enjoying an open ended 6 year run at The Michael Chekov Theatre in NYC. I'm not in that production, (six years' work would be nice!!), but I am in the new Toronto version, at least I will be this Sunday at 6pm.

It's fairly late notice, so I'll forgive you if you don't make it - just barely! We've been in rehearsals forever it seems, and the play has a bit of a floating cast (39 actors over 26 monologues) so even if you've seen it before, it's different every show.
joelle arqueros play sex relationships and sometimes love theatre