imagineNATIVE : A trio of Docs

on October 18, 2009
A look at three of the documentary offerings in the imagineNATIVE Film + Media Arts Festival, with many thanks to the NFB - I love you guys! 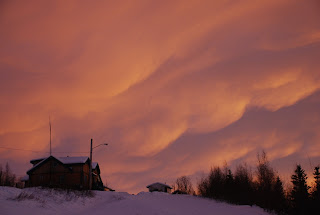 Community-run CBQM radio station embodies the heart of the Teetl’it Gwitch’in community of Fort McPherson, NWT, and this film takes you right inside the life of the northern community, with its casual and friendly vibe. CBQM is really the intersection of the town, dispensing recipes, idle chitchat, Bingo, spiritual advice and personal messages called in by its listeners, among its many roles. The RCMP constable reports on egging incidents and curfews and such, along with reminders about the upcoming Elder dinner and a wolf sighting on Main Sreet. It's a very real lifeline during the endless winter nights, and all year round.

The documentary uses a classic "show and don't tell" style, all observation with no narrative voice, simply following the people and events of the town through the slow rhythm of the yearly cycle from winter to the bright days of summer, using the beauty of the land, with its wide open skies, as a character in itself. The whole town strolls through, in and out of the lives of the people who work and volunteer at the station, and the documentary echoes their gentle pace. It's a story that truly gives you the feeling you've had a real look at the way of life of the far north through the easygoing and unforced charms of its inhabitants. 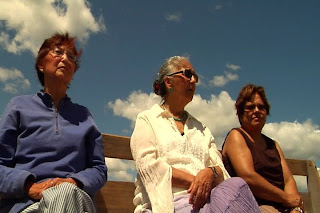 In 2006, the Six Nations of the Haudenosaunee people occupied lands being developed for residential construction near the Grand River in Caledonia, Ontario, part of territories granted to them by the British in recognition of their help against American forces during the War of 1812. The original tract consisted of six miles on either side of the river from the source, to be exact, the Six Miles of the film's title. Roque's documentary takes what turned into a months long occupation of the land and an international news story and gives us a side that was never reported on - that of the Clan Mothers and other women who were at the heart of the Reclamation.

In contrast to the well publicized news reports, this story is one of environmental protection along with the long simmering land claim dispute. The Haudenosaunee are actually a matriarchal society who used a democratic system whereby the people spoke their concerns to the Clan Mothers, and the Clan Mothers then brought these to the Chiefs to act on. 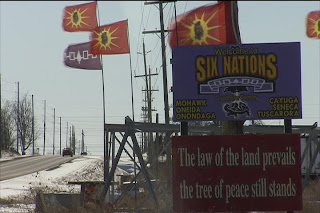 The essential part of the Clan Mothers' role, and the reason they were held in such high esteem, is their natural concern for the future of their people, and their own children, and looking after the land is a large part of that concern. What began in early days as a system of leasing the land to farmers led to standard North American style urban development, the leasing system simply forgotten along the way. After watching it get swallowed up parcel by parcel by developers, it was two young women who actually began the Reclamation effort, supported by the Clan Mothers as the natural guardians of the land, and then finally by the Chiefs and the whole Nation.

The film combines present day interviews with news and archival footage, along with lyrical shots of the landscape, the rhythm of the story punctuated by moments of the in-your-face tensions that erupted along the occupation lines. After several months, the provincial government bought up the disputed property, compensating the developers as well as people and businesses in the town. The Aboriginal land claim remains unresolved, but action itself re-energized the Six Nations community with repercussions that echo to this day.


Professor Norman Cornett
"Since when do we divorce the right answer from an honest answer?"
2009, Canada, 80 min, Digital Beta
Director: Alanis Obomsawin

Professor Norman Cornett is a most unusual educator, and I mean that in the best way possible. A professor at Montreal's McGill University for 15 years in the Religious Studies programme, his courses had no tests, no midterms, and no exams, in fact 80-90% of the marks were typically for participation. But woe to any unsuspecting undergrad who thought he or she was signing up for a bird course! Cornett exposed the students to ideas, debates, literature, and art up close and personal through visits to art galleries and film screenings, visits from academics, artists and writers who'd discuss their works, and more, demanding only their "reflections", or reams and reams of notes where they recorded their thoughts in stream of consciousness. 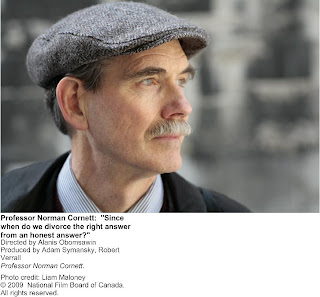 The reflections were anonymous, and never themselves marked, but he'd often read them aloud to provoke even more discussion. A class might, for example, go see a work of performance art. Then some weeks later, unannounced, the artist in question would show up in class and he'd read from the reactions to their work. Students could go by any name they liked, and quickly found that "participation" was taking more and more of their time. He took full advantage of Montreal's vibrant cultural scene and real multicultural feel (if I can still use that word in our post multicultural society!) to enrich their lives - look around you and participate, his classes taught, and in fact left many with an abiding love of the city. They were constantly challenged - he showed them how to think, observe, analyze, debate - in short, he gave them full license to use their very own natural abilities and to value their own thoughts and opionions. Revolutionary!

The film uses actual class footage shot by students along with interviews with the Professor, several former students and colleagues. He took the trouble to get to know his students, remembering names long after they'd graduated, and leaving them with memories of the joy of learning they took with them into the rest of their lives.

He loved teaching so much he never paid any attention to mundane issues like applying for tenure, and naturally, his unorthodox teaching methods eventually ran afoul of the rather conservative university's administration. (It's suggested that classes that opened a debate on the State of Israel may have been a flash point.) In 2007, after a decade and a half, he was summarily fired, with no reason ever given, his joyous circus of learning simply pulled out from under him and never so much as reconsidered, despite the signatures and testimonials of 742 former students. Where the first part of the film follows his upbeat joy in his work, the latter part wallows in the aftermath. I realize his legal battles with McGill tie into the film's subtitle and premise ("Since when do we divorce the right answer from an honest answer?"), however it feels like an overly long coda and lacks the energy of the opening, including a lengthy tangent into his wife's struggle with cancer. Yes, the story does end on a downer, but could use some editing at the end; it's as if its makers kept filming, hoping for a better ending to come about.
You might think of a documentary about a professor as being about as interesting as watching paint dry, but this Professor, despite its second half flaws, is a fascinating story and look at the nature of learning - check out a clip here.
aboriginal film activism documentary haudenosaunee imaginenative film festival Indigenous cinema mcgill university radio