Nightwood Theatre has been helping to support and develop women in theatre for thirty years now, but you don't have to be a devotee of anything but theatre itself to enjoy its current set of offerings under the title 4x4 Festival. The event showcases four of Canada's top women directors in shows taken from the international reportoire of plays by women. As Artistic Director Kelly Thornton explains, "I wanted to take the emphasis off world premiere and playwright, and to have instead a more focused look at interpretation and the director's oeuvre."

A national study called Equity in Canadian Theatre: The Women's Initiative, launched by Nightwood with the Professional Association of Canadian Theatres and the Playwrights' Guild of Canada in 2004-2005 confirmed the suspicion that the result of largely male artistic direction led to significantly fewer female playwrights or directors enjoying the same level of employment in Canadian Theatre as their male colleagues. Without training and opportunitites for women directors, the chances for advancement to positions like Artistic Director remain few and far between - the 4x4 Festival is part of Nightwood's response.

Here's a bit on the Festival's very exciting line up:

In a stunning debut called ".. fresh, passionate and blackly comic - exhilarating.." by the Daily Telegraph, Stenham wrote That Face at a mere 19 years of age, telling the story of a dysfunctional, substance abusing upper class family's unravelling.

This play, a 2002 finalist for the Pulitzer Prize for Drama and winner of the 2002-3 Susan Smith Blackburn Prize, was called "a landmark in theater history.. enthralling.. mind-altering.." in a New York Times Review, and presents an envelope pushing look at racial prejudice through the story of a relationship between a light skinned black man and a dark skinned black woman. 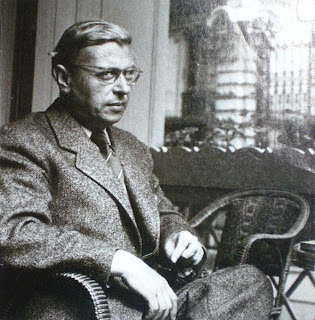 The Vancouver Sun called it "jaw-dropping", the Globe and Mail "brilliant", and it won 2 Jessie Awards for Outstanding Production and the Critics' Choice Innovation Award. Sartre's seminal novel gets an innovative treatment as a "live movie" in what amounts to a hybrid film and theatre performance. In Collier’s vision the characters are literally locked up together and the viewer voyeuristically participates in their isolation through cinematic-style live projection, and she has this to say about her production, “In Sartre's world, who we are is inseparable from what we do, and we are forever defined by the morality of those actions, not by God or Devil, but by ourselves and each other. I felt compelled to find out what would happen if we went further. If we turned Sartre's original design inside out.” (that's Jean-Paul himself in the pic btw)

In a story that's truly for our times, the New York Times called Serious Money “A breathless, exhilarating crash course in the morality of high finance.” It's a brutally funny satire on the world of high rollers - what could be a better target?

Since the Festival's all about the directors, here's a look at their bios:

Kelly Thornton has been the Artistic Director of Nightwood Theatre since 2001 where select credits include The Danish Play (Toronto, Edmonton, Ottawa, Copenhagen), Mathilde, Wild Dogs, China Doll (Governor General’s Award Finalist), Bear With Me and others. She has also directed at the Canadian Stage Company, Buddies in Bad Times, Yukon Arts Centre/Sour Brides, Theatre Passe Muraille / Planet 88 and others. She is the recipient of the Pauline McGibbon Award and a 2008 YWCA Woman of Distinction Award for her commitment to the mentorship and training of young women.

Weyni Mengesha is a Dora nominated director whose credits include: director & composer for the hit play da kink in my hair (Toronto, NYC & London); director/dramaturge for d’bi.young’s blood.claat (2006 Dora Award for Best New Play), and director for A Raisin in the Sun (Soulpepper/Theatre Calgary). She is the recipient of the 2008 Toronto Arts Council Foundation’s RBC Emerging Artist Award.

Kim Collier is Artistic Producer of the Electric Company Theatre and has been involved with the direction of most Electric Company’s productions, as well as directing for: Studio 58, Western Canada Theatre, Bard on the Beach and Chemainus Theatre Festival. She is the winner of numerous Jessie Awards.

Eda Holmes is the Associate Artistic Director of the Shaw Festival. At the Shaw, she directed The Little Foxes, Tristan, Love Among the Russians, Floyd Collins, Blood Relations, and The Return of the Prodigal. Other credits include: The Optimists and The Pessimist for Tarragon Theatre; and The Fall for Great Canadian Theatre Company.