on October 05, 2009
Nuit Blanche in Parkdale
- or, a defense of modernist face painting 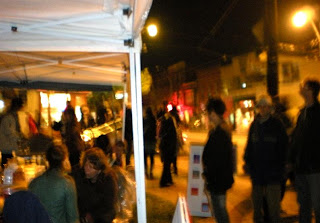 Nuit Blanche is a French expression for those occasions when you stay up all night, (of course they'd have an expression for that!), and as an arts event, it had its inception, appropriately enough, in Paris in 2002. Toronto followed suit in 2006, delighting crowds and invading the downtown with contemporary art in all its permutations - performance, video, even the museums were open all night. From its second year on, however, Toronto's version has come under fire for everything from traffic problems to a dearth of "real" well, Art, and with its official moniker now Scotiabank Nuit Blanche, I guess the corporate angle is hard to deny.

Yet, despite the griping, the crowds have continued to come out, crowds that probably aren't hardcore art fans - but isn't that something of the point? Bringing art to the masses and all that? I spent this year's fest, a few hours of it, all in Parkdale, away from the official Zones downtown and in Liberty Village, and in the "independent projects" part of the Nuit, much of it voluteering for the Parkdale BIA, whose booth was giving out green bags and modernist face painting (of which I was one of several practitioners). 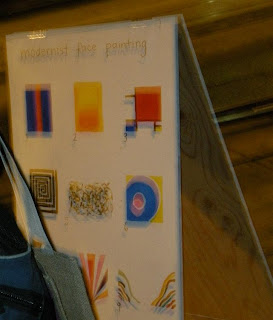 I had intended to spend only an hour volunteering as a prelim to my own art crawl, with friends who had things going in Kensington Market and right downtown too, but I ended up staying to face paint more than twice as long, enchanted with the whole process, and then seduced by the Parkdale vibe, wandered in the hood for a while after that. Personally, I have no issues with approximating Piet Mondrian or Frank Stella in soluble watercolour crayons on the faces of passersby - among my favourite canvasses were a girl of about 4 who had an immediate affinity for Jackson Pollack, and another little girl who insisted on Stella in purple, not black. Would you see these people at your average Queen West gallery opening? Perhaps not. But would they go see a Pollack if it was at the AGO? Maybe they would. 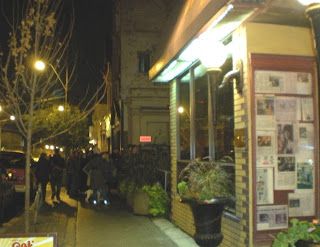 I never made it to Bay Street, but I hear the highlight was basically a midway with rides run by supposedly unemployed bankers. Is it Art? Does it matter? Surely anything that connects a 4 year old with Jackson Pollack, and a bunch of other creative stuff happening right on the street, can't be all that bad - and Frank Stella did paintings on cars, for that matter. So for me, it was low key and delightful, with many thanks to the Parkdale BIA & Aislinn Thomas for letting me lend a hand.
arts event modernists nuit blanche 2009 painting toronto visual arts