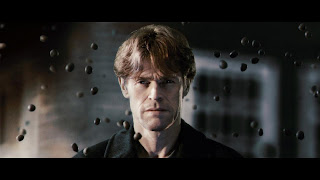 Lars von Trier's film Antichrist opens for public consumption having been much discussed and debated in the months since its premiere at Cannes in May. If you've read anything at all about it, you'll know that it tells the story of a couple's attempts to come to terms with their grief after the death of their son. Even the publicity synopsis tells you they do so by retreating to eden, being the name of their cabin in the woods, and that things "go from bad to worse" as indeed they do. 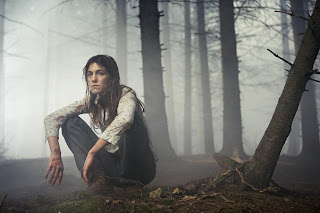 The film is visually beautiful in a way that's quite arresting, both in the earlier interior scenes that are shot very close to the characters and in the mythic quality of the outdoor scenes in the woods. Graphic sex scenes are visceral as well as poetic. Gainsbourg and Dafoe are on screen, together or separately, literally 100% of the time, and both turn in an acting tour de force that captures the nuances of coupledom - from Dafoe's controlling and somewhat arrogant therapist to Gainsbourg's portrayal of a woman who's simply been torn in two in all the shades and variations of grief - and their journey to hell to perfection.

The problem with the film, I think, is Von Trier himself, who overloads the story with heavy handed symbolism and allegory, to the point where you know exactly what's coming at every turn. In the opening scene, the "prologue", the unnamed couple have sex while their adorable moppet gets himself out of his crib and stumbles towards the open window, beside which there is a coffee table, and on which there are three charming figurines called "grief", "despair", and "pain". Guess what happens?

The body of the film is, in fact, divided into three more sections entitled Grief, Pain (Chaos Reigns), and Despair (Gynocide), (followed by a brief epilogue). Dafoe encounters a fox eating its own entrails who tells him "chaos reigns!" and a doe with a stillborn infant hanging from her nether regions. Gainsbourg mentions that her now abandoned thesis research found an account of three sisters who could make it hail... then later it hails... and the thesis was about gynocide, or the killing of women... and the title Antichrist, which you'll see within a few seconds of the film's beginning, has an "o" over the "t", you know, making it that Venus symbol... See what I mean? Can you guess what happens?

I realize all that was supposed to add another layer to what really amounts to a fairly simple story, but rather than add, it detracts from the aforementioned gorgeous visuals and fine acting and, to my view, bled the piece of any real sense of drama - a story about the corrosive nature of grief that left me completely cold emotionally. Surely it's possible to be an artiste and use symbolism and allegory to add a mythic layer to the film with a defter touch? A little subtlety? To let the story tell itself and just get out of the way most of the time?

Is it worth seeing? Yes, for the stunning cinematography of Anthony Dod Mantle, and the acting chops of Dafoe and Gainsbourg. I didn't mind the graphic sexuality or violence (or the graphic sexual violence,) and in contrast to many critics, I also didn't find it particularly misogynistic or shocking. What I thought was that it was overly self conscious of its own sense of artistry, to the detriment of the piece as a whole. You can check out the trailer here.
anthony dod mantle antichrist charlotte gainsbourg film lars von trier willem dafoe