New York, I Love You - a film review 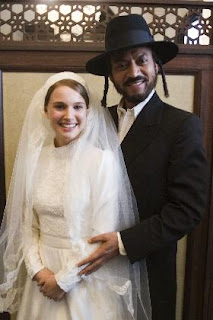 New York, I Love You is the second in a series of "collective films" conceived by producer Emmanuel Benbihy, coming on the heels of Paris je t'aime (2006). “My idea was always to make a collection of movies that would illustrate the universal idea of love around the world,” says Benbihy. “I started with Paris because that is where I am from, but I always intended to do something similar for all the mythic cities, of which New York of course had to be a part. New York is a city that has the potential to make anybody who sees it start to dream." It's an ambitious concept, and works here - or not - depending on your expectations. If you're a reader, this is an anthology of short, short stories with a loose theme, not a novel that explores anything in depth, vignettes that really skim the surface of both the city and the romantic premise. It's entertaining, but I'm not sure the city itself even comes off as "mythic".

Directed by a string of emerging directors from around the world, the filming itself had to obey a series of rules:

Once the stories were chosen, there were another set of rules, including a strict schedule of shooting each segment for only 2 days, and editing for only 7.

It's all quite interesting, but the result is a film that meanders around Manhattan following the momentary interactions that happen largely on the sidewalks, or the classic NYC bar/resto, (of which there are surely a zillion lining the city's streets,) which appears in several of the scenes. The vignettes are uneven in approach, quality and effect, a few rather beautiful and poetic, like Julie Christie as a faded opera star who takes a bit of a trip with bellhop Shia LaBeouf 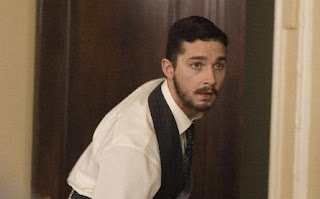 in an Upper East Side hotel, (directed by Shekhar Kapur from a script by Anthony Minghella,) to Ethan Hawke as a fast talker trying to pick up Maggie Q, which comes off as an extended joke with a predictable punchline, (if you know who Maggie Q is, in particular). I much preferred Natalie Portman's subtle directorial piece about a single father, (which she also wrote,) to her starring turn as an Orthodox Jewish diamond trader, in a story that seemed a little like it had been forced into its small format with a quick laugh or two and an inevitable moment of connection that slipped by without making much of an impact.

If you know the city, you'll recognize the little details with a smile - the French speaking cab drivers from Haiti or West Africa, the beat up doors and grimy stairways that lead to the myriad and odd spaces where people live, 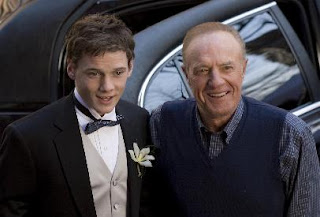 the way so many people are struggling actors, dancers, artists, musicians. Perhaps oddly for its international directorial roster, race only rears its ugly head once, (in Natalie Portman's story, where the Puerto Rican daddy is mistaken for a "manny" at a playground,) and that cab driver seems to be the only African American in town. From the grimy streets of Chinatown to Central Park, the city stars as itself, but often only as a backdrop to the various couplings and uncouplings. James Caan is a quirky pharmacist whose daughter has an "interesting" prom night in Central Park, Cloris Leachman and Eli Wallach are an elderly couple who go to Coney Island on their anniversary, Orlando Bloom is a struggling composer in a cramped apartment - you get the idea.

It's got an appealing cast, a few laughs and a few things to say, but doesn't delve beyond the surface. Call it New York Lite or New York I Like You A Lot.

Currently playing in limited release in the U.S. & some areas of Europe, scheduled for release in Toronto, Vancouver & Montreal on November 27 & in the rest of Europe through January 2010.