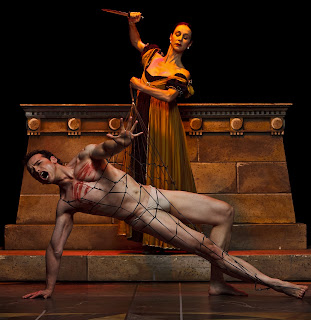 Gluck's 1779 opera is often considered his crowning glory, a masterpiece of "reformation" opera that put the drama back into an artform that had become rather static over time. In the 18th century, opera was dominated by the kind of "opera seria" we now most associate with Handel, where recitative and aria are strictly separated. Think Messiah - great music, beautiful singing, but dramatic theatre it's not. Seen in context in Opera Atelier's sumptuous period production, it's a treat for the eyes and ears. 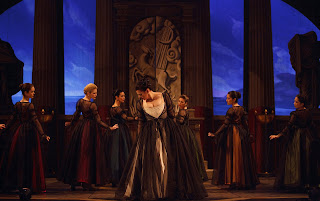 The performance brings together dancers, singers and a chorus in a rich panoply of sight and sound, ably anchored by the formidable talents of soprano Peggy Kriha Dye as Iphigénie and Croatian tenor Kresimir Spicer in the role of Orestes, both of whom exuded just the kind of opulent emotion the story calls for. The opera is based on Euripides' play Iphigenia en Tauris and of course ancient Greek legend. It's the tail end of the saga of Agamemnon's lineage and the aftermath of the Trojan war, and the (very) abbreviated version, and necessary backstory, go like this:

Agamemnon, a Greek king, sacrifices daughter Iphigénie to appease the goddess Diana for an insult so that she'll allow the Greek fleet to sail for Troy. At the last minute of the sacrifice, Diana relents and spirits Iphigénie away to Tauride to serve as her priestess, but everyone believes she has been killed. Wife Clytemnestra harbours a serious grudge over this act, and when Agamemnon gets home after a decade of war, she murders him. 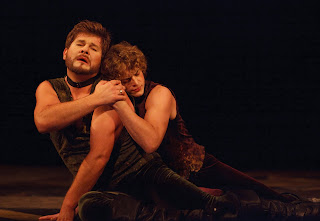 Son Orestes is compelled to avenge his father's murder, and kills her in turn, whereupon the Furies pursue him for vengeance of their own. Thus, he ends up in Tauride, where he's about to be sacrificed by the priestess of Diana to appease the gods... There's a beautiful kind of symmetry in all of it, no? There's a scene where the Taurean men sing and dance in thanks to the gods for having sent them a sacrifice, people have bad dreams that foretell of death and destruction, and poor Iphigénie is about at the end of her rope - although it does have a "happy" ending, in case you were worried. Pynkoski's direction adds a homoerotic element to the relationship between Orestes and his best friend Pylade (sung by Canadian tenor Thomas Macleay in his debut) that probably wasn't present in Gluck's era, but is also probably truer to the intent of the ancient Greek story. 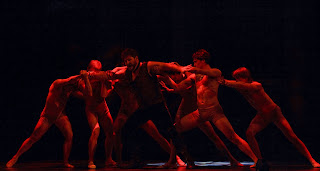 Along with an emotional and dramatic performance that would have brought tears to Gluck's eyes, kudos have to go to Doris Rust D'Eye and her gorgeously intricate costuming, along with the people now departed who created the beautifully neo-baroque Elgin Theatre, which served as a wonderful complement to the production. Tafelmusik, under the baton of Andrew Parrott, gave a flawless rendition of the ornate score -there really was no weak link to this elaborate performance. Highly recommended, and there's still time to get your tix.