Sartre's No Exit on Stage

Playing at Buddies in Bad Times Theatre - to November 21

Sartre as a fun evening of theatre? If, like me, your main exposure to the French existentialist's work up to now brings back memories of your earnest second year prof trying to explain Being and Nothingness ad nauseum, you'll be surprised at my recommendation. But, director Kim Collier's imaginative staging of No Exit is above all an entertaining theatre experience that fires on all cylinders with intriguing set design and conception, cracking good performances and more than a few laughs too.

"Where are the instruments of torture...the racks and red-hot pincers and all the other paraphernalia?" So asks Garcin (Thompson) as he's shown his "room" by the valet (Young) in the opening scene. 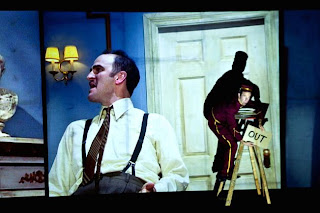 Over the course of the play, we deduce that the room, a sort of drawing room with no windows or bed, is hell, and Garcin is quickly joined by lesbian Inez (Sadiq) and blonde, blowsy Estelle (Frangione) behind the locked door. Collier's brilliant conception takes Sartre's original staging and, as she puts it in the notes, turns it inside out. The stage itself is a dusty, foggy (from a fog machine) waiting area, littered with an old desk, a pile of mirrors, a cot, ladders, and brass bells, and the "room" is off to the side, cleverly set with cameras that project to the middle of the stage.

Naturally, in Sartre's universe, outside instruments of torture aren't required, since we carry the seeds of hell within us, compelled to inflict it on ourselves and anyone in the vicinity. These are very unpleasant people, to put it mildly, from Garcin's wife tormenting war deserter to Estelle's self serving child killer to Inez, the most honest of the three, a lower class lesbian who murdered her lover's husband and then was murdered by her in turn. It must be particularly satisfying as an actor to sink your teeth into this kind of role, with all its raw emotion and no holds barred range, and the three sinners are portrayed with gusto by the trio of talented actors, their hand wringing and self tormenting punctuated by the Valet's subdued yet gleeful taunting (also ably handled by Young in Collier's expanded role).

The laughs come directly from the characters - and we definitely laugh at them, not with them, even though, as the Valet reminds us, in many respects their obfuscations, excuses and slippery denials of guilt may come uncomfortably close to our own. Even as we laugh at lines like "Hell is other people" we can wince at its truth - and that's just Sartre's point, isn't it?

I was intrigued from the moment I sat down to see the staging, and amused, bemused and mesmerized by the action on and off stage for the entire 80 or so minutes of the performance. It's easy to see why Collier's being called one of the hottest directors in the country today.