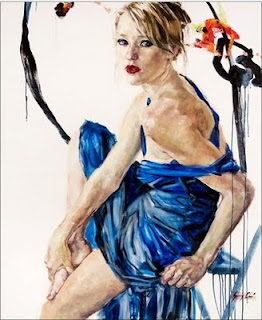 About two years ago, well known fashion designer Sunny Choi decided to give up the world of commercial fashion and devote herself to fine art, opening her own venue on Toronto's artsy-chic Queen Street West right in the gallery district. "Brush With Beauty", her current show, doesn't stray far from those fashion-steeped roots, however. Each of the large canvasses depicts slim fashion-y models in elegant poses, most gazing directly at the camera, (and they were painted from photographs). They wear make-up and stylish dresses.

Choi began her multi-faceted career as a fashion illustrator, actually, and having worked myself with a great many illustrators and illustration students (as a model,) I recognize her deft technique. 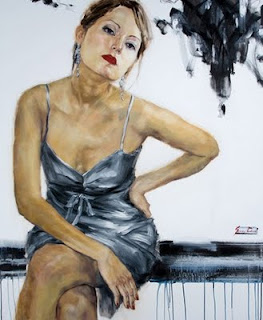 Most striking is the delicate and nuanced treatment of the model's flesh tones, from translucent washes to opaque shadows. They have fine features and moulded limbs, not completely smoothed over, (except in a couple of canvasses downstairs in the gallery, away from the main show,) but worked in marked contrast to the often rough treatment of the other surfaces, particularly their clothes. Here the brush strokes are more obvious, still nuanced and shaded, but they stand out almost stiffly from the flesh, an abstracted effect that's not really duplicated in the photographed images of the paintings - as if the model herself was the only thing that was "real". All feature a stark white background, and abstracted elements, given a similarly "rougher" painted treatment as the cloth. The colours of the fabrics and abstract shapes glow in saturated colours against the black/white. 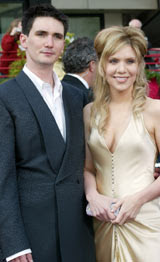 Between the canvasses are calligraphy hangings by Choi's father General Chong Hong Hi, a key figure in the development of modern Tae Kwon-Do. His calligraphy are beautifully presented, and their black, flowing strokes do complement his daughter's pieces quite nicely.