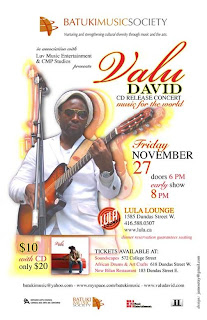 They were dancing from the very first song played by Valu David in the early show at Lula Lounge Friday night, and by the end of the set both the house and dance floor were full. Backed up by a really solid five piece band consisting of bass, drums, keyboards, congas and trumpet (with Valu himself on guitar,) and lit by David's warm vocals and stage presence, it was nearly impossible not to move to the music.

Born in Angola, David came to Canada in 2000. A self taught musician, his unique style combines jazzy R&B, soul and reggae influences with the music of his homeland, music that has a distinctly Latin flavour from its Portuguese component, anchored by solid, swaying rhythms or faster beats that also echo in the music of Brazil. 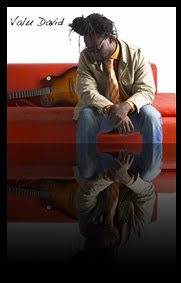 He sings in Portuguese, English, Spanish, French and Kimbundu, and his lyrics have an overwhelmingly positive message - words that had the ring of sincerity no matter which language they came in. The songs run from soulful, swingy ballads to shake it till you break it beats, and he included a cover or two, including a great version of Marvin Gaye's Sexual Healing.

He's definitely worth keeping an eye on, and hopefully his CD will be available for sale online soon. Judging from the response last night, it won't matter whether you can understand the language or the influences - your body will move you.