Zac Efron stars in Me and Orson Welles 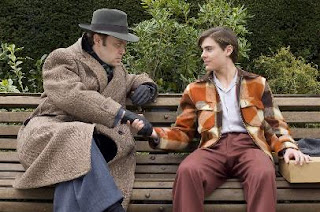 Zac Efron stars as aspiring young actor Richard in this entertaining film set in 1937, inserted into the real life story of Orson Welles' landmark staging of Shakespeare's Julius Caesar. In the space of a mere week before opening night, Richard talks himself into a role in the play, has a budding affair with an older woman (Claire Danes as the production manager,) has his heart bruised and his pride likewise against the sharp edges of unabashed ambition and over sized ego.

Efron's solid as the centre of the film and our way into this story about the fragile magic of theatre and some of the realities behind what transpires on stage. He turns in an entirely convincing performance with just the right range from the kind of bravado that gets him the opportunity - as in this scene in front of the Mercury Theatre - to the naive vulnerability that sees him blindsided by backstage politics and the calculated maneuvering of his new colleagues. 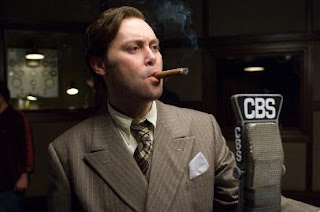 If Efron's our window into the story, its heart has to be the brilliant performance of newcomer Christian McKay as a young Welles. We get a real sense of the man's sparkling genius, along with his impossibly capricious, self indulgent persona, the director with a penchant for keeping the entire company waiting while he chases the latest winsome young lady to cross his path. He tells Richard he's a "God created actor", and it sounds like a compliment until he explains the hollowness inside it, the empty space from which the desire to become someone else springs.

Welles' historic production edited the Bard's play and set it in modern times in Fascist Italy. I dabble in a little acting myself, not much, 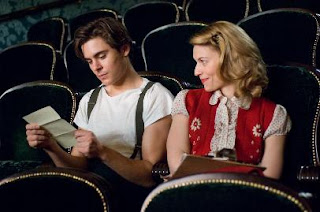 but enough to know that the film handily captures the rollercoaster chemistry of putting on a show, the sense of being at the mercy of a director's whims (sigh!) and of the whole production forever teetering on the brink of disaster. With its peppy pace and a raft of amusing peripheral characters from John Houseman (Eddie Marsan) to George Coulouris (Ben Chaplin) you won't need any special appreciation of things theatrical to enjoy what really amounts to an accelerated coming of age story. Richard emerges a little older and much wiser, and as history tells the tale, Welles innovative production won him raves from audiences and critics alike, and cemented his early reputation.