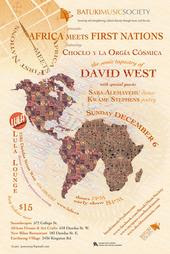 It didn't surprise me to find out that Nadine McNulty, Artistic Director of Batuki Music Society, was a musicologist. "The concept was created by our organization to establish the link between African and Aboriginal music," she enthuses. "There are similarities of chants, drumming, and other forms that are found in both cultures." Africa Meets First Nations is actually a series of events. The first one was in May, and featured Canadian First Nations musician like Marc Nadjiwan and Jani Lauzon, playing with Malagasy musician Donné Roberts and his group.

The next concert, coming up December 6 at Lula Lounge, features Ecuadorian and African musicians under the name Choclo y la Orgía Cósmica. While the concert series is Nadine's brainchild, the idea of mixing cultures was nothing new to band leader Dave West. "I've been doing this fusing of music for years," he says. From his first recording from 1996, his music has combined African elements from jazz and blues to Congolese soukous with Andes music from Ecuador and Peru. His most recent CD, 2007's eponymous Choclo y la Orgía Cósmica was recorded in Ecuador. 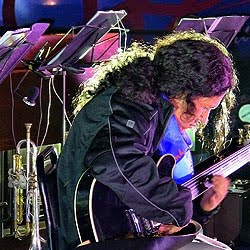 "I play some traditional music," he explains, "but traditional music needs to be lived." Even back home in Ecuador, before his move to Toronto, he noticed that many local musicians ended up playing their careers in other countries, and absorbing the musical styles of their new environment. "I wanted to create a music that reflects that state," he says. His style, and the band, were a perfect fit for Africa Meets First Nations.

You can check out one of his songs here.

One of the musicians in West's band is Waleed Abdulhamid, aka Waleed Kush, a talented and sought after multi-instrumentalist and music educator who originally hails from the Sudan. His career, too, has often involved exploring cross cultural possibilities - including a Sudanese interpretation of Bach's Goldberg Variations inspired by Glenn Gould. (Now that's Canadian! The link is Part 1 - Parts 2 through 7 are also on youtube.)

"It reflects the diversity of the city of Toronto," he says, "I feel it's a really brilliant idea, to bridge the cultures." He's enthusiastic about the way cultures mix together in the city. "I wish there was more of it. This is the real culture, not what the politicians talk about, it's the way people really live. There's a great mix of beautiful people in this city." (Waleed is also part of the Let's Find A Way initiative to help Aboriginal children affected by AIDS worldwide - check out the link for more info.) 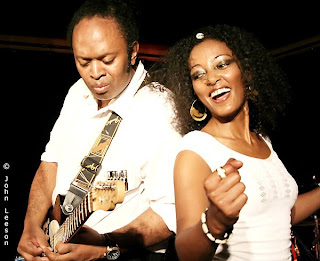 Along with the music, the event will include a performance by Ethiopian dancer Saba Alemayehu, (photo here with Donné Roberts at the May concert by John Leeson, www.to-music.ca,) and a poem written for the occasion by poet/playwright and Ghanian native Kwame Stephens. "This is the second time I've done this," he says, referring to performance at May's concert. "The challenge each time is, how do you write something that's relevant to both cultures?" What he came up with has a universal appeal. "Four-as-one - it's a tribute to the four elements of earth, fire, water and air. My challenge is to find a unique way to say it, connecting with both cultures."

I'll be checking it out this Sunday, here's all the details: