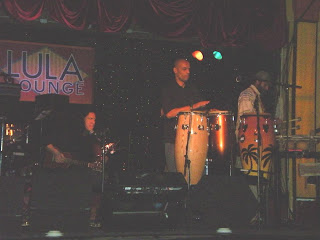 After interviewing a few people about the concert for my post earlier this week, I was intrigued enough to check out the music myself, and I'm so glad I did. Choclo y la Orgía Cósmica under band leader Dave West mix Ecuador and various parts of Africa (I believe three members of the six member band hail from the continent) to come up with a compelling style I'd have to call experimental. (Sorry about my lousy pics - they look so much better in the little view finder! - West is on the left in the first one.) 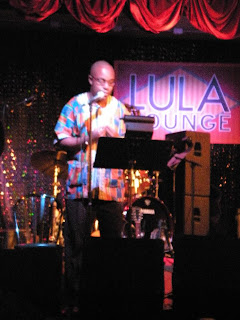 But to back up a bit, the evening started with the poem Four In One, about the four elements, written and performed by poet/playwright Kwame Stephens. He's a thoughtful writer and the piece, commissioned for the event, was well received. I'll have to look out for more of his work and performances.

Then out came West, first by himself, to start a dance with his guitar(s) - at times he played two at once. Play seems too ordinary a word for what he did up there on stage. He's obviously a master of the instrument, and enamoured of it. He coaxed a variety of sounds and rhythms from it from melodic to percussive, slow to lightning fast. He strummed it, caressed it and hit it, and at one point later in the evening, he used a bow on it for a rhythmic rasp. Once the other musicians came on stage, the sounds began to layer themselves over, hypnotic African beats, infectious South American rhythms. There were drums, congas, marimbas, recorders, guitar, voice, and other instruments I don't even know the name of (much of the variety provided by multi-talented Waleed Abdulhamid, aka Waleed Kush). 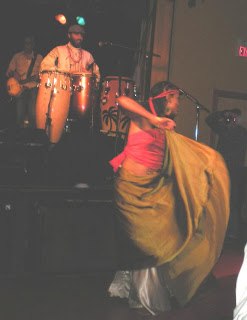 It was a tight group of very talented players, and the music ranged from modern dance flavoured tunes to experimental jazz, with ska, Motown, and Andean influences thrown all together, and all the musicians got their chance to shine in the spotlight. People stood up to get a closer look at the playing, it was that good. Movement was provided by dancer Saba Alemayehu, who was joined by members of the audience by the end of their long set.

The concert, part of a series organized by Batuki Music Society, was a one time event, but I'll be keeping the band and all its musicians on my "must see" list from now on in hopes of checking this vibe out again sometime soon.
african music dave west music ecuador lula lounge south american music toronto world music