Loving many arts means I sometimes get so busy I do inexplicable things like completely missing the new Edward Burtynsky show, not just in Toronto at the Nicholas Metivier Gallery, (where it showed in October,) 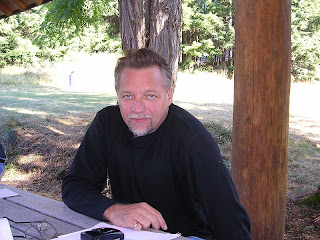 but also at Hasted Hunt Kraeutler in New York, (where it was also on view till November 21). If you've never seen or heard of his work, Ed Burtynsky is an internationally known and respected Canadian photographic artist, who's made it his life's project to document in photographs the ways in which human processes change the landscape. (Image by Jon Lebkowsky 2005.)

That's just the nutshell version. Oil, his brand new show, is the result of a decade spent traveling the world photographing the ways in which we extract and process oil from the earth. 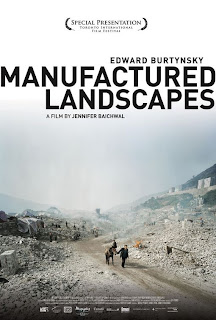 If you've never checked him out before, you'll be drawn by the haunting imagery that he captures. His prints are large scale, and rendered in meticulous detail, and a gallery full of them is quite something to view. He has an incredible eye for composition, and his work has an arresting quality. He brings to the table the view of things most of us would prefer to ignore in a way that's not at all expected.

Oil is a three year touring exhibition that's currently at the Corcoran Gallery in Washington, D.C., till December 13. You'll also be able to see the show at:
The show looks at a subject matter he's been exploring for decades. Manufactured Landscapes is Canadian director Jennifer Baichwal's 2006 documentary about Burtynsky's work, shot as he traveled to China and Bangladesh in search of the ways human activity alters the land. Many of the images have a sense of awe-inspiring grandeur, often massive in proportion, human activity seen as at ant level. They're.. beautiful, with an alien yet entirely compelling kind of beauty. 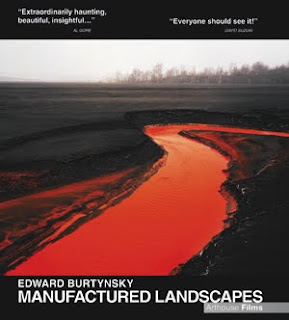 I'm oddly attracted to the snake like flow of red stuff through blackened ground in "Nickel Tailings #34," taken in Sudbury, Ontario, even as I wouldn't necessarily want to be standing beside it.

Some would argue he makes it all look a little too beautiful, that in focusing on creating compelling photography, he's missed giving the images context. A 2007 review of the documentary in the New York Times by Manohla Dargis also notes the fact that human beings are most often peripheral to the landscape, tiny insects in the giant factories or cavernous mines. Their lives in the shadow of those manufactured landscapes is never explored.

I can add a little relevant insight and context here myself, as it happens. Ed Burtynsky grew up in St. Catharines, Ontario (Canada) where his father worked at a GM Plant, just about a half hour away from Hamilton, Ontario, the industrial city where I did most of my growing up. The thing about Hamilton is, (and always will be,) its industrialized harbourfront, built up into steel factories since the 1800's. I 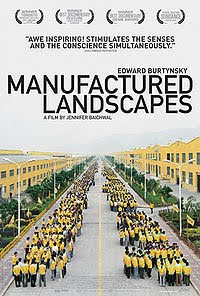 t's the dominant view as you go by on the most traveled highway in the area, the one that goes from Niagara Falls (and St. Catharines) from the U.S. border to Toronto. Anyone who lives in this area has seen that industrial skyline - in 2004's Clean (an award winning film with Nick Nolte,) that view doubled as a metaphor for hell.

The thing of it is, you can't live around all that industrial imagery and be shocked by it forever. You don't have the luxury of tut-tutting about steel factories as you drive by in your car made of steel, on your way back to a greener suburb. And in the absence of shock value and that initial horror, you can begin to have a fascination for the manufactured aesthetic. It's not that you like it exactly, but still... I met Burtynsky at a show he had in Hamilton probably more than a decade ago, introduced by a colleague at the time, and I mentioned my own visual fascination with the industrial landscape to him. 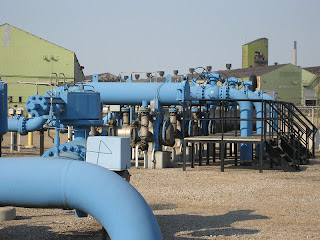 There is a street you can drive on in town that goes right through the factories and the whole industrial area, (pictured in the image, which is not by Burtynsky btw,) and he told me he felt that same pull towards the view. In fact, I saw work of his on another occasion at the Art Gallery of Ontario, and the images that really stayed with me were taken in Hamilton in 1997. They come from the recycling yards that sit along that same industrial thoroughfare we talked about, piles of iron scraps with an abstracted textural quality and lyrical tendrils of rust that form on them. (I know it sounds like an awful lot of clicking, but it's well worth the effort - check it out at on his website - click on "Works" - "urban mines" - "metal recycling" - and you'll see the exact images I'm talking about in the "Ferrous Bushling" series.)

To me, Burtynsky's images have an almost metaphysical dimension, as if he's captured the ghost in the machine, but it's not a friendly ghost, or one hospitable to the very people who created all of it. We are actually secondary to its alien aesthetic - we're usurped by the monster we've created. In a concrete way, it's what happens when you put function over form, and it raises inevitable questions. How is it that what we alone create can have such un-human qualities?
canadian art edward burtynsky fine art photography manufactured landscapes new york art scene oil photography toronto art scene