I stumbled across the Nicholas Roerich Museum on my very first visit to NYC. It's tucked into a lovely three storey townhouse in the Upper West Side on what looks like a mostly residential street - you don't know it's there until you actually walk by it. Full of paintings (he was prolific, producing about 7,000!) and antiques, it's definitely worth a visit, and they run a series of poetry readings and classical music concerts on Sundays too. Above and beyond his work and collections, however, you'll be amazed at the incredible life led by a man who was actually a key figure in the arts and beyond in the first half of the 20th century, someone who's been virtually forgotten on this side of the Atlantic. And - just a note before I get into his story and work, you might wonder about the plethora of images I'm using with this post. Much of his work falls under the copyright laws of India and Russia, and as a result, they now fall into the public domain, (at least, I read that somewhere on the Net, lol - image Guests from Overseas, 1901). 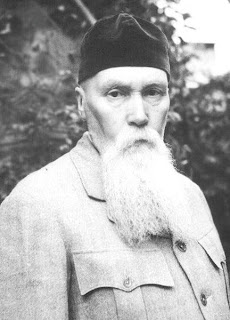 Nicholas Roerich (the man) or Николай Константинович Рерих in Russian, was born on October 9, 1874 into a prominent military and political family. He studied law and art simultaneously - a key to his future pursuits and certainly a sign of his nimble mind. It was during his artistic studies in the studio of Arkhip Kuindgi, a well known Russian landscape painter, that he came into contact with some of the people who would become luminaries of the artistic world - Rimsky-Korsakov, Serge Diaghilev and more. At the same time, he was devoted to the study of archeology, and was actually instrumental in recovering several Neolithic sites. 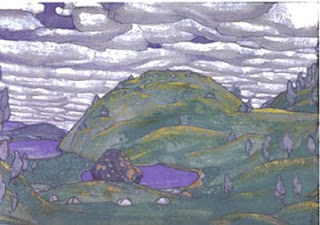 His graduation painting from the Petersburg Academy of Arts was bought by a famous collector, and highly praised by a well known critic of the time. His very early paintings, before 1900 (he graduated in 1895,) are quite representational and fairly conventional, and often based on historic fact and detail. He became the arts editor for a magazine, and secretary of the Emperor's Art Encouragement Society, and went on to paint church frescoes as well as work in theatre, including a set designs for Rimsky-Korsakov, Borodin and Stravinsky. (image here of a design for Stravinsky's Rite of Spring, 1913.)

At the time, the Russian intelligentsia was enamoured of Eastern philosophy and spirituality, (there were thought to be common roots to Slavic and Indian cultures,) and it's clear that Roerich was greatly impressed by Indian culture. From the early 1900's, though still representational and highly detailed, 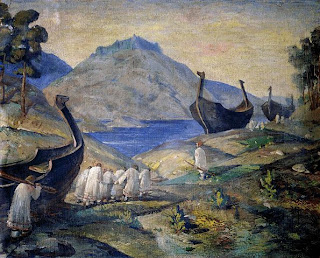 his paintings come to exhibit a luminous and weightless kind of quality that has a dreamy, ethereal sort of effect. He became a teacher as well as now Director of the School of Emperor’s Art Encouragement Society, and his paintings were shown all over Europe in major exhibitions. From 1906 on, he experimented with paint composition in an effort to get different colour effects, which were noted by critics for their originality. (Image Volok, 1915) 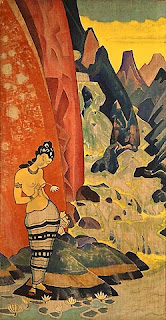 Roerich lived in a volatile era, and was very much affected by both the onset and the events leading up to First World War. Both his paintings and his writings reflect those concerns. As early as 1915, he called on Emperor Nikolai II to take measures for the protection of cultural treasures, an endeavour he would pursue for decades. In 1917, about a month after the February Revolution, Roerich attended a meeting of artists, writers and actors who developed a committee to look at the issue. (Image: Song of the Waterfall, fine art print 1920.)

Having moved to Finland for health reasons, after the Communist Revolution, the borders were closed and Roerich was cut off from his homeland, but he had many contacts who helped further his career, and he went on to design Mussorgsky and Borodin operas in London. In 1920, he was invited to tour 30 cities in the United States with 115 of his paintings, and found fertile ground for both his art and his philosophies. The Nicholas Roerich Museum was founded in November 1923 in New York.

In December of 1923, he followed his interests to India, which fascinated the artist, philosopher, and archeologist in him. His tour took him and his family to China, Siberia and Tibet, among others from 1924 to 1928. 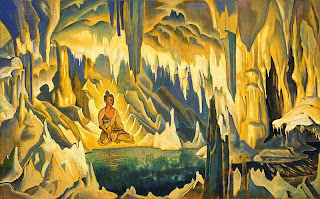 After his expedition was over, he founded the Institute of Himalayan Studies in the Kullu Valley, and lived there for the rest of his life, barring his travels. In 1934-35, he toured Mongolia and China, in a trip organized by the US Department of Agriculture to collect seeds of plants that protect the soil - long before the notion of environmental degradation became part of mainstream thought. His paintings from this time are lyrical and obviously influenced by his travels. (Image: Buddha the Conqueror, 1925.)

Roerich revered culture as the gateway to our understanding of beauty and ethics itself, and so he very strongly believed not only in the creation of beauty and art, but in its protection and preservation. 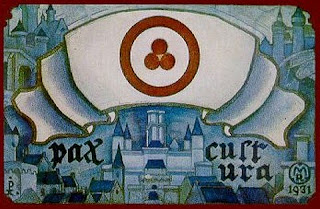 In 1929, he prepared a draft agreement dedicated to the protection of cultural values, which, though he was in collaboration with others, became known as Roerich's Pact. He also proposed a system of identification for protected objects, a "Banner of Peace", being a white cloth with a red ring and three red circles symbolizing the eternity of past, present and future, and was nominated for the Nobel Peace Prize. Here's an excerpt from the Pact, which was signed in the White House on April 15, 1935 by President Roosevelt, and eventually ratified by 36 countries: 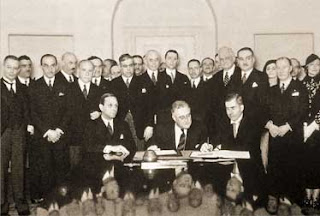 mentioned shall be deemed neutral and, as such, shall be protected and respected by belligerents. … The Monuments, Institutions, Collections and Missions thus registered may display a distinctive nag (red circle with a triple red sphere in the circle on a white background) which will entitle them to the special protection and respect on the part of the belligerents, of Governments and Peoples of all the High Contracting Parties. (Image is of President Roosevelt signing the Pact, April 15, 1935.) 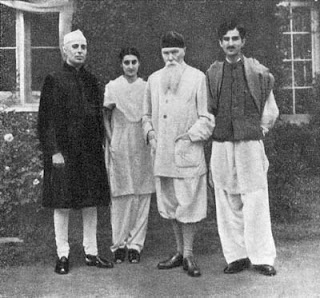 Roerich spent WWII in India, sending what money he could to the Soviet Red Cross fund and the Red Army, and spoke out both in print and on the radio in support of Soviet Russia. Much of his work from this period goes back to his Russian roots and often takes up military themes in a historic context. His late paintings are much more expressionistic than earlier work.

He came to know both Gandhi and Nehru, (in the photograph with Roerich,) and dreamed of the end of Fascism, along with a return to his homeland. He died on December 13, 1947, not knowing his request for a visa had been denied. On his memorial in the Kullu Valley is inscribed "Here, on December 15, 1947, the body of Maharishi Nicholas Roerich – a great Russian friend of India – was committed to fire. Let there be peace." 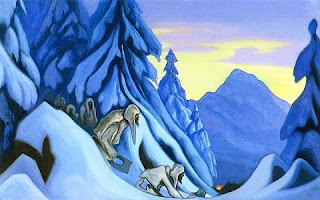 Our modern day sensibilities - including what we now know of Soviet Russia and Stalin in particular - can wonder about how this peace loving artist/activist could have been so uncritical of his native country, but there's no doubt his feelings were sincere. (And I'll just say this: the Wiki version of his life story was clearly written by Russian!) 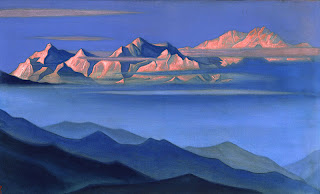 He had a mountain top and a minor planet named after him, and in a letter to the Roerich Museum of 1931, Albert Einstein wrote "I admire sincerely by Your art so much that I can say without exaggeration that never have landscapes made such a great impression on me." (Image: Guerillas, 1943, and last one Kangchenjunga, 1944)

Today, he's often seen as a mystic of sorts, and if you Google his name you'll come up with many links to Rosicrucians, theosophy and the like. Some even claim he designed the U.S. $1 bill, with its supposedly occult symbolism. As an odd and peripheral coda to his story, two of his paintings were stolen from the museum last August (2009). One was returned mysteriously in the mail shortly after, but luckily the thieves were dumb and loose lipped, and apparently had the piece, Himalayas, hanging in their living room where they would brag to people about how they'd gotten it. One of the people they bragged to went to the police, who initiated an undercover sting. The thieves, a man and woman, apparently even told the "prospective buyer" that it was "hot" and that he shouldn't hang it in his gallery! Needless to say, both paintings are now back where they belong. In his museum, you'll find three floors of his luminous paintings, along with a collection of antiques and Indian art, some of his writings, costume and set designs - just a small part of the legacy of this fascinating figure.