Tommy Wiseau's The Room is a Blast

People throw plastic spoons and have impromptu games of football - and that's the audience! They yell at Lisa's unfaithful ways, and shout corrections when the characters in the film claim to be together for seven years at the end after mentioning five years at the beginning, or remind Claudette of her breast cancer diagnosis...

Screenings of The Room, a film by one Tommy Wiseau, are definitely an audience participation event.

"Can you ever really trust anyone?" So asks The Room, the indie film to end all indie films, during the course of its tortured 90 minute plot. Wiseau plays Johnny, a "successful banker" who lives with Lisa (Daniel). He thinks they're about to get married, but Lisa's bored, and starts sleeping with his best friend Mark (Sestero). Things go from bad to worse for Johnny, who ends up alone and despondent, deciding to end it all... What will become of Denny (Haldiman), the young boy he's befriended, and Claudette, (Carolyn Minnott,) Lisa's Mom, who keeps giving her advice like "you have to think about your financial future..." ?

Armed with a pitch and convinced his melodrama, which he'd already written as a play and a novel, was cinematic gold, Wiseau tried to shop his idea around to Hollywood studios in 2001. 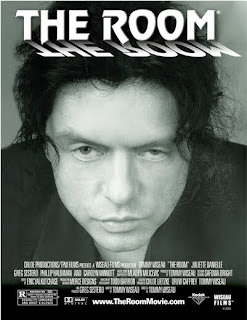 It was uniformly rejected, but he was determined, and spent about five years getting together the approximately $6 million he eventually spent filming and promoting his masterpiece as "A film with the passion of Tennessee Williams." After all his efforts, the film debuted in 2003 at two theatres in Los Angeles. The only problem is... the film that Variety noted was "a self-distributed directorial debut so hopelessly amateurish that auds reportedly walked out during its two-week run in July 2003".

How bad is it? Judge for yourself with the trailer.

Seemingly undaunted, Wiseau kept showing the film once a month in LA, and it began to get a cult following for its seemingly unintentional humour. He started to add "Experience this quirky new black comedy, it's a riot!" to his promos, and in interviews now claims that the films many plot holes and general ineptness was all part of the plan. I will say that it's hard, though, if you actually know what you're doing, to make a film that's inept on so many levels. There are plot holes, like Claudette's announcement early on that she's been diagnosed with breast cancer. "But it'll be all right.." she assures her daughter - and the fact is never mentioned again. Denny, a young man Johnny's befriended, gets roughed up by a "thug" supposedly for owing drug money.. a fact that is also never mentioned again. 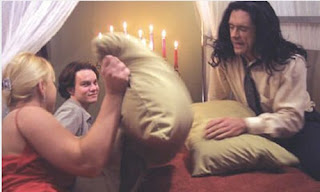 The male characters have a bizarre predilection for tossing around the football.. when they're about 3 feet apart - and somehow, someone always ends up getting hurt. People keep having impromptu pillow fights. The script clearly changed over time, and dialogue is poorly and obviously over dubbed. Some scenes aren't entirely in focus. Characters come and go without reason, and change costumes in poorly edited mid-shot. There are many hilarious soft core porn sex scenes - complete with candles and roses, Lisa's boobs and Johnny's butt. Sestero, as Mark, ostensibly more modest, apparently has sex with a blanket wrapped around his groin. That's only scratching the surface of all film's the noticeable gaffes. Believable characters with motivation and such? Nowhere to be found. Pointless scenes and inane dialogue? They abound. It is, in short, so bad that it's effing hilarious. 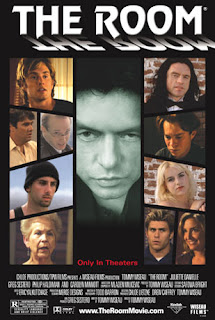 As for Wiseau's current claim to have manufactured a faux-inept movie, cast members have disputed that in interviews. Even Greg Sestero, who apparently really is a friend of Wiseau's (although he doesn't say "best friend"... he he - it's an inside joke you'll get once you see the movie!) says in an online article "You watch the flower-shop scene and ask yourself, “What were they thinking?” It pulls you in. And at the end of the day, it’s just entertainment. So, “so bad its good” definitely pertains to this movie."

Here's a montage of Wiseau's acting range for your consideration, and here's Wiseau's classic line - typically pronounced to the audience's wild applause.

Monthly screenings began in LA, New York City, and have steadily spread across the US, Canada and into the UK, with audience members' raucous participation part of the whole experience. There are odd framed pictures of cutlery in Johnny and Lisa's apartment - hence the throwing of the plastic spoons (although, as mentioned by management at the Royal, please don't throw them at the screen!) Those who clearly have seen the flick before add their own pithy insights. In one scene, Johnny talks about his problems with Lisa with Peter, a friend who's a psychologist. Peter's response is something along the lines of "..life's complicated.. you just have to keep going.." Someone yelled out "You're a terrible psychologist!" much to the crowd's delight.

And I have one enduring question. What room??? What the hell is the title all about? Check the movie's website or your local listings for a screen near you. If you're in Toronto, join The Royal's Facebook page and you'll get an invitation to the next screening in January.
independent film the room the royal cinema tommy wiseau