on January 25, 2010
Aldeburgh Connection
The Lady of the Lake, and other tales
Walter Hall, University of Toronto
January 24

The Schubertiad is a rather delightful and civilized way to spend a Sunday afternoon, and this past weekend I was treated to a superb performance of Schubert's Lady of the Lake and other miscelleneous Lieder and piano works by the Aldeburgh Connection. 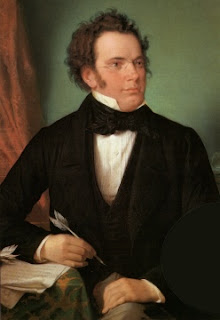 The first half consisted of the Lady of the Lake, based on Sir Walter Scott's poem. Scott was hugely successful in Schubert's time, and many composers used his pieces as inspiration, in no small part to gain some access to the lucrative English music market. (Such is the level of knowledge I got from the copious programme notes - this is the University of Toronto after all!) The story is a convoluted one, concerning Scottish clan rivalries, a disguised King James V, and three men all after the hand of the lovely Ellen Douglas. It was the Romantic era, and love and justic prevailed, I'm glad to say.

The soloists were wonderful, including Anita Krause (mezzo), Christohper Enns (tenor), and James Levesque (baritone), displaying a really nice dramatic sense and range even while they sang simply standing beside the piano. The sense of drama was aided by narration from Raymond O'Neill, whose expressive reading of the text certainly added to the story and performance. Schubert's music is easy to love, and the songs included probably his most famous, Ave Maria, along with ensemble pieces sung by a student chorus. I almost prefer voices together to soloists, and the gorgeous harmonies were an aural illustration of why.

The second half began a piano duet from accompanists Stephen Ralls and Bruce Ubukata, the Overture in C "im italienischen Stile", D597. Apparently, Schubert wrote it, along with a second Italianate overture, on a bet over a glass of wine and a fit of pique after his friends and companions admired a piece by Rossini a little too enthusiastically. There followed a series of Lieder, the subjects including a tribute to a trout, a jealously murderous dwarf, and the Erlkonig, after a poem by Goethe, in which a young boy is stolen from his father despite his best efforts.

There was an intimate and informal tone to the proceedings, in keeping with Schubert's original intention. Pieces like the Erlkonig were written by him and first performed by Franz and his friends, just hanging out together. Ralls provided the gems and tidbits of information that filled out the gaps between the music for a very fitting tribute to perhaps the most affable of the great Romantic composers.