Full Bloom isn't just an all male dance piece about the male experience. In the ultimate tribute to the three talented performers who took the stage, I actually forgot that the show was about men over forty until Huddleston Jr.'s spoken word bit about halfway through. Up to that point, I was simply bemused and entertained by the clever and expressive choreography, the notion of dealing with maleness via dance. 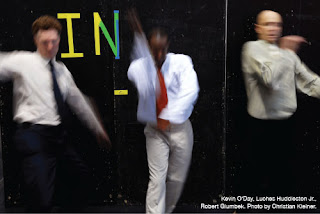 It's not that the show has a narrative thread exactly, but those themes are never far from mind, from the opening bit portraying that universal passage of (Western) malehood - the tying of the necktie - even to the specific dance moves. There are pas de deux with moves that alternate between half-competitive jostling and the intertwining, the intimate lifts and turns we've come to expect from the male/female version. In the latter, the female role is the epitome of grace; when the distaff side of it is left out, the result is less refined, more athletic, more hard angles and fewer curves. When the three dance together to the same moves, they're slightly different, each bringing a little something extra to it, a little competitive, a little visual one upmanship.

Each performer had a solo in the spotlight, and if the years have taken away any of their juice, that fact wasn't in evidence. O'Day and Campanella have backgrounds in ballet, Huddleston Jr. in modern dance, but the their various styles blended and bounced off each other nicely, seamlessly. The nearly sold out house for opening night was on its feet for a well deserved and extended standing ovation, one that eventually included Glumbek too, who was in the audience.

The dance goes from tension to exhaustion to competition; they're agonizing over the mystery of childbirth and the pains of aging, half fighting one minute and supporting each other the next. It's funny and touching, and just like, you know, a bunch of guys - that's how men are.
ballet kevin o'day luches huddleston jr. modern dance roberto campanella toronto dance scene