Interview with Hettie Vyrine Barnhill - Part of the Cast of Fela! on Broadway

on January 27, 2010
Hettie Vyrine Barnhill ,one of the ensemble players in Fela! took time out from rehearsing both for the show and an upcoming appearance on the Jimmy Fallon Show Live (January 21,) to speak to me about this remarkable production.

It's not often that a Broadway show gets national attention without the star power of a Hugh Jackman, let's say, or without a long run and a touring company or two. But Fela! - which tells the story of Fela Anikulapo- Kuti, a Nigerian singer/multi-instrumentalist/political revolutionary - 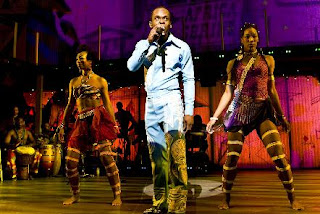 is a unique show in so many ways, it's really no wonder it's been featured on national TV shows like the Colbert Report after getting rave reviews in the NY Times and other major media outlets, and garnering more than its share of buzz. A uniqueness in approach was apparent to Hettie from the moment she joined rehearsals back in June. (She's pictured to the right in the image above, with Lauren De Veux and Sarh Ngaujah as Fela.)

"The show was already structured," she says, "but flowing like water. It was a new process to everyone." Hettie describes a constantly changing, challenging environment. "I had to learn how 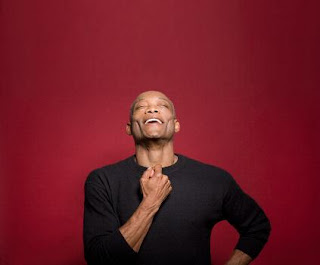 to be flexible. I would learn all the material in the classroom, and then take it to rehearsal, and then maybe next week... it would change," she says. "It was changing right up to the previews. Working with Bill T. Jones, he wanted you to be ready to jump right in. He and the band always had a conversation going." She says that watching his mind work via the fluid development process was just one of the great rewards. "He was thinking as a dancer, as a choreographer, and as a director," she explains. "My favourite parts were his talks - seeing his genius." The unusual process also resulted in a strong dynamic. "This was a team effort," she says. "I feel part of a family."

It's a collaborative process that Jones has described in previous interviews, going back to the initial development of the concept itself as an off-Broadway show that ran to packed houses in late 2008. Jones worked with Aaron Johnson, leader of Antibalas Afrobeat Orchestra, longtime proponents of Fela's Afrobeat style, who knew the music inside out, and Maija Garcia, a movement artist and student of Yoruba culture. 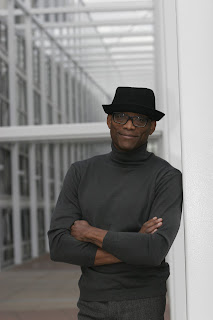 Antibalas is now the pit orchestra, and Garcia an integral member of the cast. They looked to bring Kuti's infectiously rhythmic music, Afrobeat - being his own blend of Nigerian highlife and West African jazz, later also influenced by American jazz - to 21st century audiences.

But the effect of the show is not only about bringing Fela's music, which was actually well known in Europe but marginalized in the North American pop music machine, to greater awareness. "It's an important story," Hettie says. "It's needed. We see all the negative things about Africa in the media - AIDS, warfare... There's also beautiful art, beautiful music. There are people from Texas, from the mid-West - where I'm from - who come to see the play, and they leave feeling like they've learned something too. It opens up your mind."

After settling back in Nigeria after travels abroad, Kuti, (whose adopted middle name Anikalupo means "he who carries death in his pouch",) opened up his own nightclub in Lagos, and began a life that has extreme outlines, from his marrying 27 women all at once, (many of them the dancers in his show,) to violent scrapes with authority, and starting his own political party. In 1977, he released an album called Zombie, the title song of which in particular is highly critical of the Nigerian military. In response, the army conducted a raid on 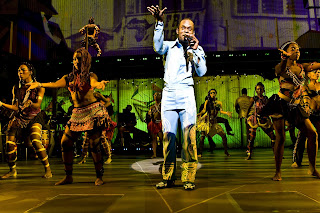 his compound, nearly beating him to death, and throwing his mother - political firebrand and feminist revolutionary in her own right, Funmilayo Ransome-Kuti - from a window. She died of complications from her injuries in the year that followed.

Jones' staging is set in the Lagos nightclub, Africa Shrine, and takes up Kuti's story around the time of that infamous incident, with Funmilayo (played by Lillias White,) appearing as a spirit. The show combines elements of theatre and live concert in a unique blend that has audience members clapping and dancing along. Shawn Jay-Z Carter and Will & Jada Pinkett Smith joined the production team just before official opening night in November, hopefully giving them the backing for a long run. 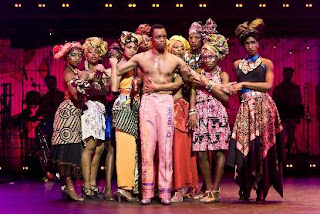 Fela's polygamist lifestyle is the easiest target for the judgement of North American audiences. Barnhill plays one of the wives, his Queens, as he called them, and though they have no lines, their roles are indvidual and researched, and far from the passive go-go dancer you might first imagine. "I play one of the original wives who left him and came back," she says. "There was a conscious decision to stay. When the soldiers came, the wives, they were treated horribly by the military. It wasn't easy to stay with Fela. But, they loved him and believed in what he was doing." Fela himself, although he's most often seen as an unrepentant sexist, would describe that mass marriage as an act of solidarity and support with the women who had suffered with him through the raid. "Myself, I don't know that's what I would do.." she laughs, referring to the polygamist lifestyle, "but they were sisters," she insists. "They kept the community going." She studied her character, Omarala, in pictures. "She was tall, strong - a warrior. I think of that when I'm dancing." (Kevin Mambo as Fela in the image above, with his Queens.)

The 1977 raid on his compound was not Fela Kuti's first or last brush with authorities - a reminder to North American audiences, perhaps, that while political activism can be something of a fashion statement here, in many places in the world, it's something you pay for with your life. In a real life coda to the story, Africa Shrine, run in recent years by Fela's eldest son Femi Kuti and other family members, was shut down by government authorities (also not for the first time) in June 2009, over what many assume to be Femi's own political activism. Plus ça change...

Just in time for the musical, Fela's catalogue has been re-released on CD. Check out the musical here, and check out the late great Fela himself here.