An Interview with Jenny Young, in the cast of George F. Walker's And So It Goes

on January 28, 2010
I recently caught up with Jenny Young, a busy actress between rehearsals for And So It Goes, the world premiere of multi-award winner George F. Walker’s first new play in about a decade – and this role comes hot on the heels of her turn in Factory Theatre’s December production of Michel Marc Bouchard’s The Madonna Painter, leading to some interesting comparisons of working on both projects. 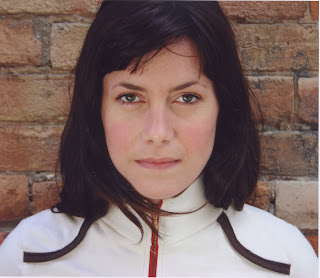 “I would say the biggest different between the plays is the voice of the writer,” Young observes. “The Madonna Painter was poetic realism – and a translation from the French. The language wasn’t as immediately accessible. There were lots of discussions, lots of studying the text. (Walker’s) voice is a voice we’ve heard before, and a language we understand. He’s got a really good ear for that.”

In The Madonna Painter, a Quebec priest commissions an Italian painter to create a fresco dedicated to the Virgin Mary in an attempt to protect his parish from the ravages of the Spanish Influenza outbreak of 1918.

“In the Madonna Painter, my character was shunned by the rest of the villagers,” Young notes, “in this play, my role is also outside the norm. With George, strangely, it’s not really magic realism… but he reaches for the extreme edges of society.”

As she mentions, And So It Goes is gritty rather than poetic in its scope, dealing with Ned and Gwen, a middle class couple whose lives are sent spinning out of control by Ned’s downsizing and their 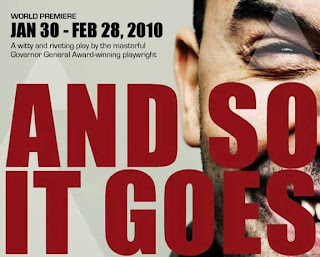 daughter’s schizophrenia. Young plays the role of Karen, the daughter, against Martha Burns as Gwen and Peter Donaldson as Ned. In an unusual turn, the couple turn to the unorthodox therapy of literary legend Kurt Vonnegut (played by Jerry Franken) to help them out of their rut.

“To be in the same room with these people was a thrill,” she says of working with the other cast members. “For me, it was about the challenge of playing a bipolar schizophrenic crack addict, to live inside her without making her into a caricature. It’s a trap even an experienced actor can fall into. It’s really hard to wrap your brain around what she’s thinking – we tend to judge people like that. It was a challenge, but a good challenge.”

With all its quirks and Walker’s trademark black humour, it’s a story with universal themes. “It’s about two people struggling with the loss of their daughter – even though she’s still present.”