Like the title of acclaimed director Jeon Soo-il's family drama, much of the subtitling in this Korean indie film is not-quite-English. It gives the dialogue an off centre quality to the point, at times, that you're not entirely sure of what's being said. 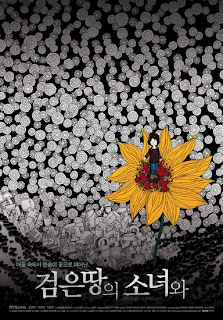 But you won't be watching this film for the dialogue. It tells the story of 9 year old Choi Young-Lim (Yoo Yeon-mi), who lives with her father Hye-Gon (Jo Yung-Jun) and mentally-handicapped brother Tong-Gu (Park Hyun-Woo) in a bleak mining town in the mountains of Kangwon province. Hye-Gon works in the mine until black lung disease ends his career. An attempt at a business goes nowhere, he's got the one ailment they won't pay compensation for, the company owned house they live in is scheduled for demolition.. and he gradually spirals downwards into alcoholic despair, leaving Choi the only one left to deal with their stark realities. As such, the story has familiar outlines, and - to get back to my point - the dialogue and progression of the plot are curiously bloodless for such emotional territory. There's a fight scene that's too obviously faked, with little sense of action or drama, typical of an overall tone that seems somewhat emotionally removed.

Where the film does excel is in its visual storytelling. The industrial landscape, in all its manmade ugliness, is brought artfully to life by DOP Kim Sung-Tai as a sterile environment, devoid of beauty and grace; not malevolent, but indifferent to its human inhabitants, dwarfing them with its utilitarian, industrial aesthetic. They live in a makeshift town of thrown together wooden buildings. Nothing looks clean, new, or really warm in the wintry landscape. In the opening, we follow Hye-Gon down into the mine and feel their dank and sunless confines, the blank faced, back bending labour of the miners. A shot of Choi, her small, mouth pursed anxiously as we see her father behind her, in a room just behind a paper screened door, lying drunk and passed out, says much more than all of the dialogue put together.

If it lacks a certain dramatic tension, the actors do bring an effective sense of the poignancy of 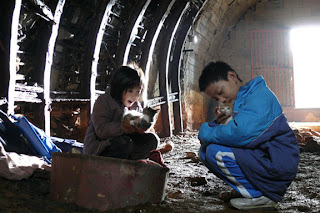 their situation. Hye-Gon's face wears its sense of despair, and sweet faced Yoo Yeon-mi is a wonderful child actress, conveying her tightly held sense of responsibility in her posture and a small frown, in the depths of her big eyes. She's a worthy addition to the cinema's lexicon of hard living children. In the end, Choi sets out to fix the family's problems herself with a 9 year old's logic. It's visually involving and evocatively told, if emotionally somewhat disconnected.

You can check it out online here.