An artist's talk is a chance to get to know a show, or even a body of work, from the inside out, and despite apologizing for any language gaps in his first ever talk in English, Japanese multimedia artist Koki Tanaka managed to get across his artistic approach with a wry, almost self deprecating humour ("I can't create anything.. so I arrange things") that was representative of the mood of his work in general. 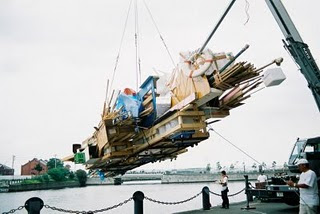 He began by mentioning that, as a young man returning home for family visits, he'd be constantly annoyed by his parents' lazy practice of simply starting up a new bar of soap in the bathroom when the old one was not quite done. It resulted in a pile of nearly used up bars of soap beside the sink that he'd get rid of each time he came - until one day it struck him: his parents were creating sculpture, albeit unwittingly. It gave him the notion of looking at ordinary objects in new ways, which sounds simple enough, but has led to some very interesting explorations on his part.

In essence, his work begins by simply looking at ordinary objects as if they'd never been seen before. What is this? What can I do with it? And what would happen if..? His work takes the form of installations, photographs and video, (although he hesitates to call himself a video artist for fear of being hemmed in by the label). One of the videos, Everything is Everything, shows a series of short clips of "things being done to objects", for lack of a better description, like a rubber boot folding and dropping off a railing, or a mattress falling down stairs, or someone kicking a ladder. Alone, they don't sound like much, but together they become an interesting and often amusing parade of snippets that make you look at the objects differently yourself. 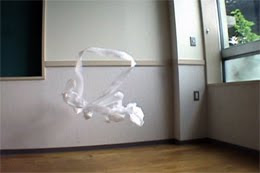 It's a point of view that's at once childlike, naive, and very deliberate - even if they're created in a state of unconscious intent, as Tanaka describes it. In an installation at La Chaine BankART Studio NYK, Yokohama, he took trash left by previous shows and put it together as a raft, which he floated in the bay (see image above). He confesses a fascination with rolls of toilet paper - used in the video "Fly me to the moon" (image). In a video called "How to draw a line on the road", (2007) for example, he lines up a series of quart milk cartons and drives over them with the tire of his car. In another, he feeds caviar to pigeons, and while the majority ignored it, one intrepid bird became what is surely the first ever pigeon to eat caviar, captured on video. It's often happenstance that dictates the nature of the work, as in the raft installation, or in a piece inspired by a New York City residency and a lack of funding. He takes a room full of empty display cases and shelves and so on, and creates a multi level installation that is indeed reminiscent of the Manhattan skyline. 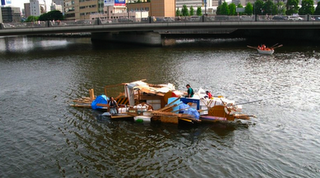 His current show at YYZ is the result of a 4 week residency, and includes a video of Tanaka getting a haircut by three different stylists, and my favourite, a kind of playroom where you go up and down ramps and around walls set with videos that show mechanical and/or repetitive actions. Having just come from Los Angeles, he says much of his inspiration comes from a reaction to Toronto's mid-winter cold spell - something he says will also be informing future work. It's an interesting show and a neat point of view - all of it originally inspired by a pile of soap.
conceptual art japanese contemporary art koki tanaka toronto art scene yyz gallery