If the musicians of one band stay to avidly listen to the next band's set, then you know that the bar will be set pretty high for the sound you can expect to come from on stage. Last night (January 28) at Toronto's Lula Lounge was just such an evening. The crowd was full of jazz lovers and those high standards weren't disappointed. 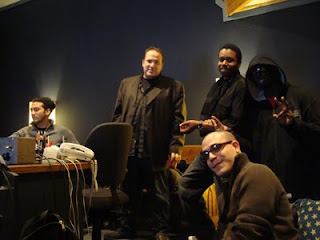 very modern kind of sound, one with its roots in artists like Weather Report and Miles Davis. It took the jazz standard of verses, bridge, solos, and then again, with a take innovative enough to keep all of it fresh to the ears. It's another good sign when the band looks like they're having fun playing the music. It sounded loose, flowing, like it could turn in any direction at any given second, and the four of them would follow the thread seamlessly. Not surprisingly, their music is strongly rhythmic, with a great rapport between Brown and his drummer* a solid basis for the harmonic explorations of the tenor sax or keyboards. It was virtuoso playing that still took notice of its audience in a pretty tight set that left most, I think, wanting more. 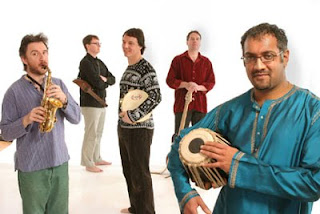 Next up was Tasa, the brainchild of Ravi Naimpally, an Indian born Canadian musician. With his roots in the music of North India, he put Tasa together to explore the cultural -and musical - depth and diversity that exists in Canada. The music is hypnotic, and came from an 8 piece band that included bass, guitar, drums, keys, and three wind players (tenor & soprano sax, trumpet). Ravi sits with his tablas to one side.

Their sound is rhythmic, and while the Indian influence is immediately apparent, particularly in the melodies and harmonics, there's a strong element of modern jazz in it too. The music is infectious and polyrhythmic, multitonal and definitely danceable. Again, you felt the looseness and ease of musicians who knew each other well. There were rounds of solos that showcased the depth of talent there was on stage.

It was a different flavour of virtuoso than earlier in the evening, making it really the perfect double bill for a jazzy Thursday night out.
lula lounge modern jazz rich brown rinsethealgorithm tasa toronto jazz scene