My Next Stage Theatre Festival Blitz

I tried to cram in as much of Next Stage as I could this weekend, ending up seeing 4 of the Festival's 8 offerings. I want to emphasize my choices were based on my own time constraints, and not meant to diss the other 4. From what I could see, the overall quality is pretty even and the bar set pretty high for some cool viewing at affordable prices - with packages starting at a mere $48 for 4 plays.

Written by Nicholas Hune-Brown and Ben King, who brought us The Lord of the Rings: The Musical: The Musical! a hit a 2007's Fringe Fest with its tale of Toronto mayor David Miller fighting off evil developers, this musical tackles the tale of Rex Maverick (O'Brien,) a Hollywood has-been trying to resurrect his career in the People's Republic of China, of all places, (but the idea was based on an article about the burgeoning musical theatre scene in that Asian tiger, no word of a lie!) It's an absurdist comedy with lots of twists to the story - a treacherous wife, a murder plot, the "good" girl who dislikes him at first, (and we all know where that road leads!) - throw in the production that will save the town, and is on the brink of closing, and it has familiar outlines. You won't find Judy Garland and Mickey Rooney in this one, but you will find the bodyguard/assassin who finds a talent for dance, and the mid-level Communist Party official who wants to sing..

The absurdity's in perfect pitch, and the play cleverly written to allow for both high notes of theatre and comedy in the same moment - like Stephen Lilly's fab dance sequence - or the heartfelt love ballad sung by Sui Fung (Lana Carillo) to her boyfriend .. as he staggers around poisoned by mistake. The actors play it just right, straight and sincere in the face of the insanity, and there are plenty of laughs.

This play is billed as a black comedy, but drama would do just as well. It's a nicely nuanced story about what happens when your mother - someone integral to the structure of your backstory - dies, and your comfortable fictions about family mythology begin to fall apart. Brubaker plays Anne McBride, single working woman and the family "fixer", looking after her ailing mother and increasingly distant Alzheimer's stricken father with a kind of joyless practicality. Highet is the younger sister who escaped to Australia and a family of her own. When Jean, the matriarch, (Dunsmore) dies, they come back together and predictable tensions ensue, (predictable, that is, if you've got any siblings). 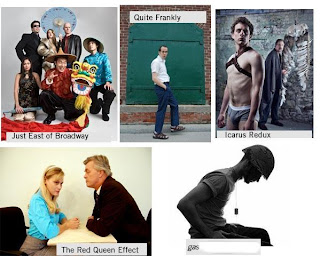 Jean's ghost or apparition serves as the niggling memory, a concrete symbol of Anne's growing realization of just how far apart her glowing eulogy of the quintessential loving wife and mother, bringing joy to all around her, was to the reality of her parents' rather empty marriage. The piece is well written, taking what seems like very familiar outlines and laying out clues to the mystery, the great secret that shattered the heart of the family and left it a mostly empty shell that floated on for decades. Bill, the father, adds to the effect, slipping in and out of time in his dementia. Family memories have to be taken as a collective; when you add up all the pieces, that's how the truth is found.

What's particularly strong is the acting all around, from Brubaker's woman on the edge to Clark's addled Dad, without a false note between them. It's directed by Andrew Lamb, who's also directing My Mother's Lesbian Jewish Wiccan Wedding for Mirvish.

This engrossing one man play takes us inside the claustrophobic world of a man and his mother, a story shot through with black humour and squirmy eww moments (the narrator looks after his invalid mother's caregiver role, including her daily hygiene -nuff said!) It's a quirky story that rambles on from the opening admission of a life changing incident in grade school when he lost control over certain bodily functions (another squirmy moment) and ran home with dirty pants to the ridicule of the other kids.. and his mother too. It's a story that gets inside the head of that school weirdo and his life of misadventures; the repressed anger, the social awkwardness, the sad human being who's somehow never able to connect with the world. 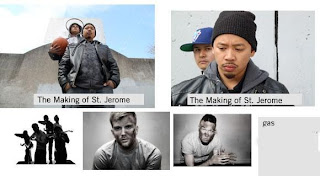 But most of that darkness is hinted at, implied rather than spelled out in a series of anecdotes that had the audience laughing both at his plight and clear sighted observations. Sage-Passant was impeccable in the role, completely embodying the narrator, with his stooped posture. He steps out of that character occasionally to depict the mother and a couple of odd characters that cross their paths on the way, but the piece's strength is certainly in his character. You won't be sure of what's coming in the end; you'll have your suspicions, and probably, like me, be proven wrong.

Sean O'Neill's retake of the Greek myth of Icarus, the boy who flew too close to the sun on wings created by his father Deadalus, and thus died, eschews conventional story for a more abstract meditation on parental ties, and parental grief at the loss of a child. As O'Neill says in the play's notes, "The play began as a flash in my mind of Daedalus, the Ancient Greeks' archetypal artist-creator.. He was alone, in the dark, crying for his lost son, reeling with the knowledge that his creation led to his son's destruction, trying in desperation to conjure the boy back into the world of the living."

As such, we follow the jittery imagination of Daedalus (Whittaker,) someone who's loosened his grip on the concrete world, creating a marionette, then the vision of the Boy himself (O'Neill). The outlines of "what happened" are sketchy, and only hinted at - the flight, the fall, the death. What's compelling about the play is the interaction between the father and son, conveying the sense of parental responsibility, the patience, the occasional moments when the mask slips (and surely it's only coincidence that this is the second play I saw to include a parent mentioning the cleaning of shit from their progeny's pants??) and the overwhelming grief that keeps him in the world of his imagination, the world where the Boy didn't die.

Also recommended (the ones I didn't see):